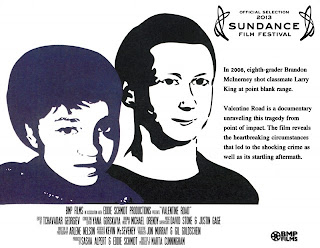 Marta Cunningham's new documentary Valentine Road takes an up close examination of the February 14, 2008 murder of the 15-year old from Ventura County, Larry King, by a 14-year old schoolmate of King named Brandon McInerney. McInerney shot King twice at near point blank range while they were in a computer class together and King died 2 days later. The case became a national cause celebre on the subject of school violence, especially against gay students and was featured on the cover of Newsweek Magazine and in virtually every mainstream media outlet. The 2011 trial of McInerny ended in a controversial hung jury but eventually, the accused ended up in prison on a plea bargain. The documentary, co-produced by HBO, proved a big success at the Sundance Film Festival, and will be showing on HBO sometime in October, 2013.

Valentine Road starts by going back and forth between the particulars of the two main figures of the film. Larry King, a petite, feminine gender-variant child who was given up for adoption, raised by unsupportive adoptive parents, and was living at a foster facility for teens at the time of the murder. King started crossdressing at school several years before their death, including heels, girl's jeans, jewelry and makeup and endured daily taunts and bullying from other students. Furthermore, several close female friends of King explain how their friend confided they wanted to be called "Letitia" and was identifying with a more transgender identity than gay boy. 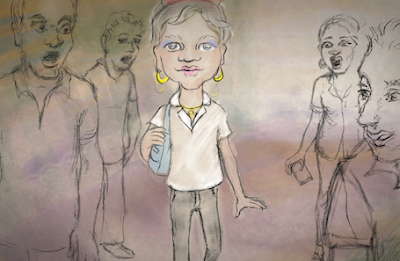 McInerney was raised by an abusive dad and drug-user mom and the film, unlike some news accounts, doesn't pull punches in showing his violent side, including close circuit unprovoked attacks of other students at school and his increasing obsession with Nazi skinhead imagery. While Cunningham is moved by McInerney's background and clearly has issues with him being tried as an adult, she never backs off from his ultimate culpability or tries to soft pedal the racism and homophobia ingrained in Brandon, his girlfriend and much of the community they lived in.


At the same time, the film deftly interviews several teachers at the school, one of whom (who was also in the computer lab at the time of the attack) was clearly an ally/confidant of King's. She controversially bestowed the teen with a green dress, which was brought up in the trial as a supposed way she encouraged unacceptable behavior in King. Another of King's teachers spouts ignorant views about queer kids for the camera and pretty much dumps culpability for the murder on the victim. What makes the documentary quite remarkable is the degree of access Cunningham received from those in Ventura County both sympathetic to King's plight at the school and those who seem positively callous as to what the bullied teen experienced. In an outrageous scene, after the trial a number of jurors (middle class, white women all) gather together with Cunningham for a coffee klatsch to guilelessly discuss why they voted to acquit McInerny. As Cunningham explained in the 'Q&A,' most of the persons she interviewed didn't take her seriously since she was a straight woman of color, seemed to have no agenda in making the film and came off as a bit of a soccer mom herself. Several of these sequences with apologists for McInerny go beyond cringe-worthy into profound exposes of ingrained racism, and cultural homo/trans phobia. Balanced with this is the story of King's teacher (the one who gave the dress) who was, in effect, blamed and railroaded by the school district and is working at Starbucks as the documentary is being filmed. 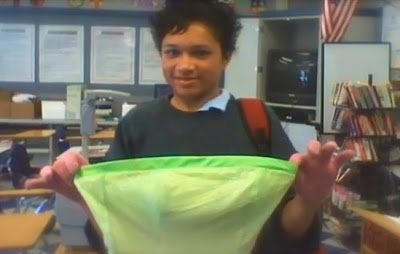 What I truly appreciated about the film is how it firmly rebuts the trope that "two young men's lives were ruined (equally?) by this event." (something I've heard often repeated in media and online) In a stinging final scene about his fate, Brandon is seen celebrating his high school graduation in prison, wearing a cap and gown, warmly surrounded by his family and prison officials as he's bestowed his diploma. He will be paroled sometime in his mid-late 30s. Cunningham ends the film with a shot of King's small grave marker and explained she wanted a clear contrast between the two teens' fates who, while they both underwent difficult childhoods, one has a possible life ahead of him while the other's is irrefutably over. Moreover, the director explained she had no interest in pursuing interviews with McInerny since King was unable to speak for themselves. Good for her for at least fighting the urge to inexorably link the murderer and the victim of his hate crime, a pitfall many such documentaries fall into.

As powerful as Valentine Road is, there are still a few shortcomings which, viewing the film as a trans person, made me uneasy. She never really goes too deeply into how King was made into an iconic gay matyr even though it's pretty clear relatively early in the film that Letitia King was a trans girl and not a gay boy. She does a good job showing some of the warped logic used by the defense team to basically paint King as a 'sexual predator and bully' but doesn't really discuss how one of the defense attorneys was an out lesbian (and said so in court) while she was presenting a defense which hinged heavily on gay/trans panic, which is illegal in California. I also felt with all the talking heads in the film, at no point was any perspective given about what trans teens actually experience in school or how difficult it is to even identify as trans. And ultimately, both in the credits and 'Q&A,' Cunningham continues to use male pronouns and the first name Larry for Letitia King. When I questioned her about this at the showing, she replied "it might have to do with the fact he was dressed as a boy when he was murdered."It's a curious explanation since, in cases like the Jorge Steven Lopez murder in Puerto Rico (another murdered "gay teen"), media coverage ignored how Lopez was presenting as a woman at the time of their murder and still categorized it as the murder of a gay boy. I sometimes felt Ms. Cunningham didn't have a lot of understanding or perspective about trans teens or how their issues are frequently misrepresented as gay issues. 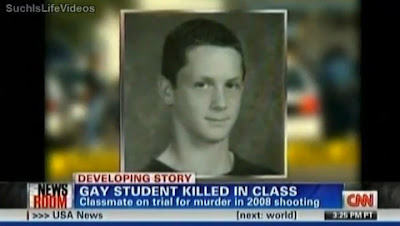 Its insistence in misgendering apart, Valentine Road is a powerful, disturbing documentary all the more amazing it's made by a first time director who doesn't come from a filmmaking background.  Once shown on HBO it will no doubt become the definitive statement on this trial and, for the most part, we're lucky it's so cogent and thoughtful and resists falls into clichés. Valentine Road is skillful at balancing personal tragedy with explorations of messed up social norms, bigotry and, especially, how so many project their own issues onto a horrific situation like this. And speaking of that, what concerns me at this juncture is how her gravestone (and the documentary) still read "Lawrence King," which means a trans girl is going to be further misgendered in perpetuity. It's hard for a non-trans person to understand how that is a fate equal to death for many trans people, and a legacy no trans teen should have to imagine. 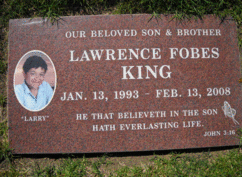