Tomboy... an experiment in indentity. 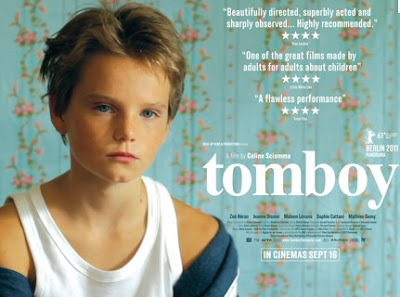 French director Céline Sciamma's second feature, "Tomboy" is, on the surface (as I've seen it described), a film about a 10-year old girl pretending to be a boy. Laure has just moved into a new neighborhood with her family (mom, dad and uber-femme 6-year old sis, Jeanne). Dad is mostly off at his new job, very pregnant mom is expecting a new baby boy soon and the kids have a few more weeks to summer before they start at their new school. The completely boy-ish looking Laure ventures out to meet a neighbor girl, the very mature-for-her-age, Lisa, who instantly takes Laure for a boy. On the spur of the moment, Laure tells Lisa her name is Mickaël, Mickaël quickly becomes the object of Lisa's affection and part of the local gang of kids and Tomboy is off and running. Needless to say, Mickaël is going to experience love, pain, self-realization, acceptance and intense rejection in the next 80 minutes. 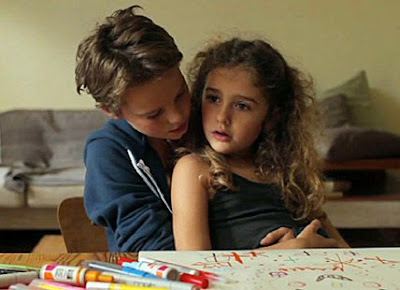 Sisters (but maybe not)
POSSIBLE SPOILERS:

Mickaël is initially somewhat tentative around the pack of rowdy boys with whom Lisa spends her time. She identifies him as "different than the others." But, in short order, lanky/flat Mickaël is knocking around with them, spitting, roughhousing, going shirtless while playing soccer and, in advance of a swimming outing, creates his own boy trunks and packer (in a classic of kid ingenuity). Girly-girl sister Jeanne finds out the secret and basically blackmails Mickaël into allowing her to play with the other kids. A kid-on-kid fight leads to the house of cards falling down and the last part of the film involves some minutes of intense, but wholly believable humiliation and pain. I could imagine Trans guys or butches seeing Tomboy could find the last scenes of the film profoundly painful. 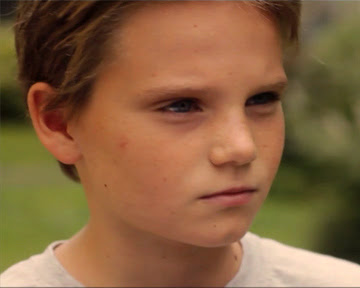 The way Sciamma captures the cruelty, short sightedness and social world of childhood are some of the best scenes around this age group ever made. She does long unedited takes of the kids playing together, being caring, farting around, and trying to gross each other out, as each is trying to find their own place in the group. None of them is trying harder than Mickaël. He deals with situations like, the boys he just won over with his stellar soccer play, now is each taking a pee in the fields which leads to the first possible crack (no pun intended) in Mickaël's story. All the performances, especially by the kids, are outstanding. Zoe Heran (an actress and not a trans kid) as Laure/Mickaël is completely believable. With little sister, Heran shows both the love, utter selfishness and even cruelty kids have for their siblings. As a boy trying to fit in, Heran bestows a longing, competitiveness, toughness, bewilderment and fear the character cycles through. Perhaps the very best performance in the film is kiddie actor Malonn Lévana, who's amazingly subtle for a child this young, especially in some brilliant scenes where she pulls off huge feats of lying and braggadocio both for her own kid status and trying to protect her older sibling. Also impressive is Jeanne Disson as the aggressive tween, Lisa, who treats Mickaël as her pet summer love and attempts to control his every move until it all imploads on itself. 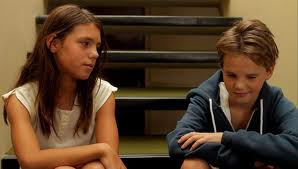 Lisa and her boytoy, Mickael
As director Sciamma has explained in interviews, French for a "tomboy" is "garçon manqué" (basically, a 'failed boy'**) and she thought the term was too insulting to the character so, instead, went with the English term. Upon seeing the film, I kept asking myself, is Mickaël a tomboy? That's one of the key questions the film poses (at least, for queer, genderqueer or trans viewers). Not too surprisingly, Sciamma leaves the gender identity of her central character rather ambiguous or, at least, 'in development.' In a French interview, she describes the film as "a child's first real life experiment with gender." As an experiment, she seems to be saying Mickaël might go many different directions from this experience. But to be accurate, the character first presents themselves as very masculine identified by the first scene, both in terms of presentation and behavior. Even when as Laure, they never identify themselves as a girl.

Up until the film's final minute, I was dead convinced this was a film about a trans boy on pretty much every level. He is obsessed with his body (and to some extent, presenting with a penis). Yes, tomboys are masculine presenting (and, granted, working through a lot of issues in terms of where their identity might fall) but, on some level, a tomboy is still girl-ID'd. Mickaël seems several steps beyond that. His 'experiment' is his first real chance to see how far he can get as a male. But, in the film's final minute, after the secret has been revealed and resulted in great humiliation and a seeming break between Lisa and any hope of summer love and belonging, it gets set on its ear. Lisa asks Mickaël what his name is (meaning his birth name). He says Laure, and the two smile at one another, perhaps promising a furthering of the relationship or, at the very least, a re-blossoming of friendship.

I can see viewers with different gender identities having hugely differing feelings about the ending. As a trans person, my immediate reaction was it wasn't quite real and a bit of an imposed "cheat" by a cis lesbian-ID'd director who didn't want to make a film specifically about a trans boy. That a trans boy wouldn't just be cool relabeling himself as a girl (although I'm sure it's happened to many transmasculine kids as they go through cycles of attempting to transition). But in fairness, to someone who's butch or genderqueer (masculine but very much not male ID'd) the ending would make perfect sense and have just the right touch of hopefulness, ambiguity, and a young exploration of living between the binaries. For most 10-year olds, it's not an either/or situation (even if it is for many trans kids) and no matter what the identity is, it might be be years before the parents will even permit them to go in any direction away from the mainstream. Mostly, I left the film with a profound sadness thinking about what the main character will go through when puberty starts next year. Not that it's a carefree summer by a long shot but, basically, it's all going to go downhill from here. 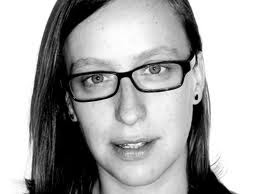 Director Sciamma
Those who love films about children, young people who can actually deign to see a foreign language film, and people from all over the queer/trans spectrum should run out and see Tomboy. For those in the last group, I suspect there will be many who have had similar experiences and feelings to those shown in the film (albeit on a less grandiose scale of summer fail). Sciamma has said it's become a hit family film in France (where they aren't freaked out by the brief, totally non-sexualized shots of kid nudity) and I think Tomboy could prove a wonderful educational tool/conversation starter for tweens and teens. See it, see how you react to the questions of identity it poses (or avoids?) and fall in love with its totally empathic link to the world of childhood pain and longing.

**The French have some incredibly blunt terms for social phenomena. I recall recoiling the first time I was told that the holiday "Passover" was known in French as Paques Juives (basically 'Jew Easter"!)
Posted by Gina at 2:49 PM