Which one is it? (spot the trans model) 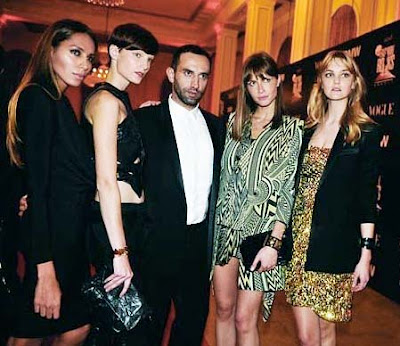 Tisci with his models. Lea is on the far left.


Last week Women's Wear Daily reported Givenchy designer Riccardo Tisci was using his Brazilian trans woman assistant, Lea T., as a model in the advertising campaign for their fall/winter line. The campaign is photographed by the team of "Mert and Marcus" (Mert Alas and Marcus Piggott), two of the most famous fashion photographers in the world and features a number of high-profile models. This story was immediately picked up around the world on a wide number of fashion websites and blogs including mainstream news sources like The Huffington Post.

As Tisci explained his casting process for the campaign, "I selected people among my close, talented friends and family and asked to illustrate our friendship. I wanted people from all kind of worlds, photographers, artists, transsexuals." I'm not sure how being transsexual equates with artistic disciplines, but Lea has worked with Tisci for a number of years as an assistant and fit model (the models whose bodies are used to adjust final tailoring before the runway shows) but she has no intention of going into modeling as a profession and is interested in studying to become a veterinarian.

And the winner is...
Included with this original story were two advertising campaign photos of grouping of models. WWD, Givenchy or Tisci made no attempt to identify which of the models was Lea. As it's prone to do, this partial disclosure led to much speculation on many websites as to which one of the models she was. Of the several dozen sites I looked at, the main guesses were #3 (with the pink hair) and #4 (with the long hair, kissing the center man on the right image). Although many thought #3 looked male/"tranny", it was explained that is, in fact, famous Polish model Malgosia Bela. #4 was referred to by a number of people who said, "it's obvious, look at the adam's apple." Little issue was made of the fact this model (while highly androgynous) was, in fact, wearing male clothes while none of the other other women were. #4 is a male model, (probably with hair extensions). Lea is actually #5, wearing the feathered top and leaning her hand on the far right model's shoulder. 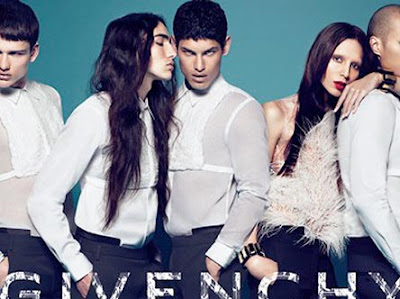 Lea is the second from the right wearing the feathered top.

A number of people commenting on the models wrote something like, "they all look like trannies" using a old saw that's long been used to disrespect cissexual women... ugliness equals looking like a man. There can be little doubt how Tisci is playing "spot the tranny" in putting the very femme looking male model and the trans woman in the same photo. The other male models might have classic model bone structure, but they aren't in the least female or even androgynous looking while #4 is pretty clearly both. The question is, "what does a trans woman look like and what does a trans woman model look like?" The emphasis of the adam's apple in model #4 suggests a female look with a lingering male aspect (and some people commenting mentioned this). To make it even more mysterious, all the "guys" in this photo have their hands in their pockets (as does Lea). The women in the left photo don't. Triiiicky. 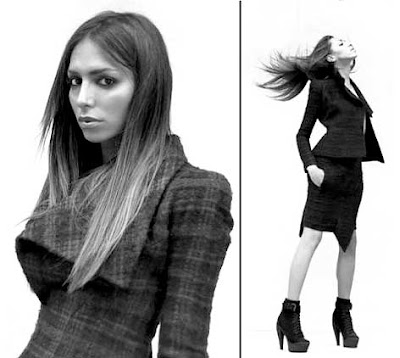 Prior photos of Lea.

Trans = a glamorous it
Tisci has also explained Lea's inclusion in the campaign illustrates the "masculine-feminine dichotomy" he is now known for." Curiously, none of the comments on the photos mention model #5's androgyny until she was clearly identified as the trans model. But the "trans model as androgyne" line was often used about a famous trans woman model from the 1980's, Teri Toye. More than 25 years before this campaign, Toye was walking the runway for Jean Paul Gaultier, Comme des Garçons, Thierry Mugler, Karl Lagerfeld for Chanel and, especially, for iconic 1980s designer Stephen Sprouse, for whom Toye served as a muse. And this was all done as a out trans woman. Her look has been much copied, especially with the recent renewal of interest in 80s style. 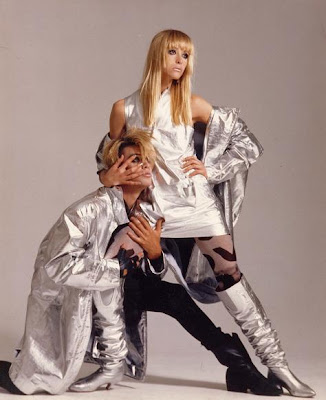 Teri with slave from the 1980s.
Quirky and boho, yes, androgynous... not really

V Magazine, a publication much favored by fashionistas, featured an article about Toye which stated, "TERI TOYE'S ANDROGYNOUS BARBIE-DOLL LOOK CONTINUES TO INSPIRE." But, curiously, Teri Toye was no more androgynous than any other model from that era. Because she was trans, androgyny was projected onto her. She walked with famous models like Iman and was a stablemate of Elle MacPherson at 1980s New York's most famous agency, Click (along with famous male model, Attila, who was much copied by male models for the next 20 years). So well known, they were all featured in a story in People Magazine. 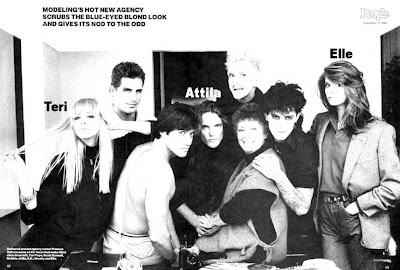 In the 1980s, Teri Toye modeled with Elle
MacPherson and it wasn't such a big deal.

A very sexy, ummm, person
A more bizarre attempt at projected androgyny in fashion (and trans exploitation) came from last year's Rio de Janerio fashion week, and the sportswear designer "Complexo B". At the end of the show 25-year old trans porn performer, Patricia Araujo was featured in a slinky outfit. Araujo, an extremely curvy woman (probably with silicone augmentation) isn't in the least androgynous looking and is rather a bombshell (and not really a fashion model), but was placed on the runway with the men, not with the women models (like supermodel Isabella Fontana). Araujo is a pretty well known media figure in Brazil, made a huge splash and garnered world-wide publicity for Compexo B. No explanation was made as to why she was walking the runway with men. 20 years earlier, trans actress and model Roberta Close walked in Rio fashion week with supermodels like Tatjana Patitz and it wasn't seen as a gimmick. 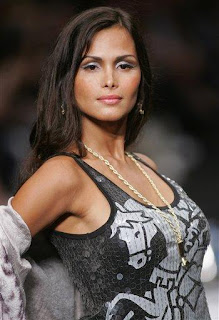 Yes, Patricia Araujo walked the runway with
"the boys"... isn't it obvious why?

Needless to say, there have been a number of trans women who've modeled at a high level (although to some extent, without revealing their trans background). April Ashley was in Vogue and Harper's Bazaar in the early-mid 1960s and photographed by iconic photographers like David Bailey. Around the same time, Amanda Lear modeled for famous designers like Paco Rabanne, Yves St. Laurent, Mary Quant and Ossie Clark. Both were closeted trans women who had performed at the famed Parisian female impersonator club, Le Carrousel, in the late 50s-early 60s. Both had considerable rumors floating around about their histories when they were in the modeling business. During the 70s and 80s, besides Teri Toye, there were trans models like Lauren Foster, who modeled in various countries' versions of Vogue Magazine and doing runway shows for Yves St. Laurent. 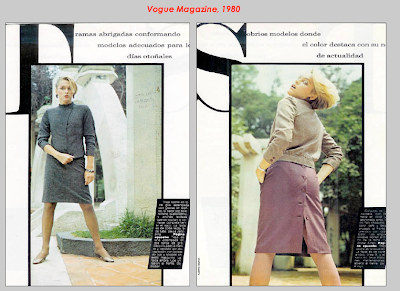 Lauren Foster in Vogue before being "outted".

The truth will set you free... from work
Ballroom trans star, Tracy Norman (AKA Tracey Africa) was photographed by reknown photographer Irving Penn for Italian Vogue), did runway and showroom work in Europe as well as non-fashion commercial work. A more recent trans woman model is Senegalese Barbara Diop (now based in Cape Town), who's appeared in Italian Vogue and was the lead model for the televised ceremonies for the World Cricket Cup. All these women were "outed" at some point in their careers yet continued to work (in a reduced capacity) in different markets for runway or photo shoots. On the reality show America's Next Top Model (which has produced a smattering of successful models, but none really famous) one near finalist, Claudia Charriez, was booted from the competition for being trans while Isis King was basically hand picked for, among other reasons, being trans. 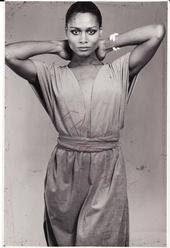 Tracy Norman - A "baby Beverly Johnson" —
before she was "outted."

So is Lea T. modeling for Givenchy a gimmick or a breakthrough? To break down walls, one has to do something which hasn't been done before or to do it in a way wholly unique from the way it's been previously done. I can't say Tisci's campaign does either. She clearly has many predecessors. There is little question the photos of Tisci's work, on some level, play with the idea of "spot the tranny" and androgyny vs. binary, which has some element of exploitation—but could also be thought of as exploration. A real breakthrough would be Tisci using Lea and not doing PR about employing a trans woman for a model. Perhaps, understandably, neither Tisci, Lea or Givenchy wanted any future "trans panic-style" unmasking and sleazy publicity should her past be revealed. I wish both her and the campaign well, but hope both society and the fashion industry can get past the need to view this as an experiment in gender, or a way to get publicity and more about getting the right person with the right look (another issue) for the clothes.
Posted by Gina at 10:10 AM