The Tranny Day of Remembrance 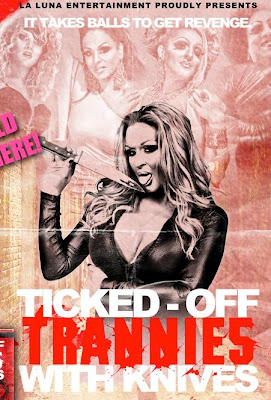 To all you cineastes out there, here's earth shattering news about a film breaking boundaries at the Tribeca Film Festival. That's right, the New York City festival Robert DeNiro started which is quickly becoming one of the most widely coveted and media-covered film festivals in the country. This film is being promoted as the first film at the festival featuring transgender people in transgender roles. Impressive, huh? It all sounds so empowering. And what's the name of this genre-busting film? Glad you asked, it's called "Ticked Off Trannies With Knives."
The line at the top of the poster reads, "it takes balls to get revenge." In case you don't understand, that's a direct reference to "trannies" (evidently an affectionate term all trans women use to refer to one another) having testicles and a scrotum. I'm just upset LaLuna Entertainment, makers of this statement of community pride were unable to somehow integrate the words "penis" or "cock" onto the poster but, after all, it IS going to be shown at a prestigious film festival where it will get national and international coverage.
This work of film discusses the sensitive issue of violence against trans women and the plot involves 'Trannies' extremely violent revenge against men who abused them, but you'll be happy to know it's all been done with a lot of humor. As the director stated, "I don't consider myself an advocate. I'm not really a protester or anything like that, All of my films feature comedy."
Watch a clip and see just how HEE-LARIOUS it is! 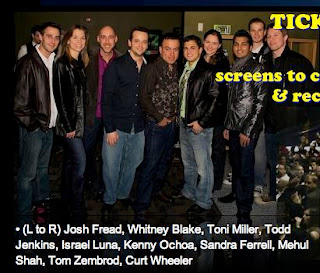 The team who made 'Trannies with Knives'
Cissexuals = 10; Trans people = 0
Home grown and authentic
Obviously, such a statement about the trans community would only be directed by someone from our community, right? Right? Well, you'll be shocked to know "Ticked Off Trannies With Knives" is, in fact, directed by a gay man, Israel Luna. I know, I know, it is indeed amazing how someone not even trans could understand our community so well as to even 'get' the lingo we use to refer to one another. Even more impressive is how Israel is connected to the Dallas Voice, the main gay newpaper in the Dallas area. How wonderful a gay newspaper is able to point to one of their own reporters as someone who can look outside his own community and represent the community of trans women with such a high degree of accuracy.
The transgenders' friend
It just reminds me how gay men have a special insight into the world of trans women since, you know, trans women are really just, *wink wink* gay men, *cough-cough* in, ladies, um, drag. Gay men understand that drag is what makes the delusion of 'transgenders' actually believing they're women all the more tolerable. Without the ability to gob on lots of makeup, wear ugly clothes no woman would ever wear and act campy, trans women would really be A DRAG. As Mr. Luna stated:

I didn't want to write about a male gay bashing victim. That's a story we've seen all too often, and I wanted to do something more modern and I thought 'Whose story do you never see on the news these days?' It's not gay men—it's transgenders."
As Mr. Luna stated in the Queerty article:
I would love for there to be an article about a guy guy who was about to get bashed but instead the basher ended up getting bashed.

How about this idea Mr. Luna... a campy, trashy film about Matthew Shepard, but played for laughs. You could call it "F*gs Fight Back" and if anyone in the gay community doesn't like it, explain to them how they have no sense of humor, two of the actors in it are actually gay and you're just trying to make something to entertain people. Perhaps you should call up Judy Shepard and run it by her. I'm sure she'd appreciate your brand of activism and not feel as if you're trying to exploit her son's murder. 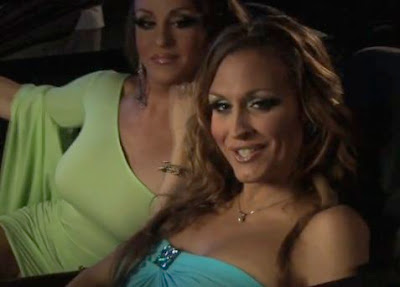 Hi, I'm Bubbles, ha ha, and this film, ha ha, is about
trannies getting attacked, ha ha
In memory of Angie Zapata
And just to show how empowering this film's message is, they mention real victims of transphobic violence like Angie Zapata and Jorge Lopez Mercado in the trailer and cleverly blend that in with the story about the fun trannies with knives. At one point one of the trannies asks another tranny/hooker, "what if your client turns out to be one of those rapists?" The tranny/hooker replies (as though it would actually be great) "oh... that would be baaad." (and get this, while she's saying that she's rubbing up against a guy, ha ha). Compare that positive coverage of trans women being raped with something depressing like this where someone the local media identified as a 'male tranny/hooker' in San Antonio had the nerve to report how she was raped by an on-duty cop. Again, where's the laffs in that? They need to "La Luna" the story up and add some tranny fun, glitter and wigs.
Can't take a joke?
I'm just so disappointed some debbie downers in our community have already complained about this heartfelt exposé of trans womens' lives and the violence they deal with. The whiner was Kelli Busey, an activist trans woman who doesn't seem to understand how slathering on tons of makeup, acting hoochy and parodying women gives one power and provides many in the gay community a lot of entertainment. She had the nerve to even question the hilarious title of this cinematic work and to somehow suggest the director didn't take our struggle for rights seriously. According to a Queerty article on the film, the director rightly responded:

Luna claims that he didn't know "hot tranny mess" was a put-down; he'd heard his trans friends call each other that and thought it meant something akin to "ghetto-fabulous"—something over-the-top cool and stylish. When he realized it was offensive, he'd asked his trans-associates their opinions. A lot of them used the word "tranny" as well and found his use humorous rather than offensive. So in the end, Luna decided to stick with it. It was a catchy title and he figured anyone who'd get offended would entirely miss his film's overall message.

Well said, Israel, don't let those humorless trannies push you around. Next that angry tranny will probably try to complain to GLAAD. Haha, don't worry, GLAAD hasn't said anything about this film. After all, it was made by someone in the LGBT community... it must be okay. In other words, if you can't take a joke, then f*ck you! As Mr. Luna says, he likes to incorporate humor into his films, even into scenes where trans women get attacked. According to Queerty:

Luna's bashing scene contains some humorous elements. The lead actress, Krystal Summers, says that the bashing scene plays on her worst fears of what could happen anytime she reveals her trans identity to a potential boyfriend. Nevertheless, the scene itself still plays out with some degree of B-movie camp. While Boner's chasing down Bubbles—a tuft of bloody hair left clinging to his bat—Luna cuts to a scene where a dying transgender woman drives a lime green stiletto heel into the eye socket of her attacker with one final head-butt.

333 more chances at humor
Luna understands that anything can be made funny, even trans women getting murdered. Not like the depressing people who put out this recent study (borrring) which stated 333 trans people (almost all trans women) have been murdered in acts of transphobic violence in the past 2 years. No fake rubber boobs, no sexy gowns, no mile-high wigs in that study. I ask you, where's the fun and camp in that? Mr. Luna, with 332 murders to go, you have a lot more tranny films to make.
Hey, maybe we can show this at the next Transgender (make that Tranny) Day of Remembrance just to lighten up the dreary festivities and get some more gay male attendees! (LOL)
**My apologies for needing to resort to rabid sarcasm... it's hard to deal with something this offensive any other way.
Should you wish to express your disappointment with the Tribeca Film Festival for showing this film, you may contact: Tammie Rosen, at (212) 941-2003, trosen@tribecaenterprises.com
A Facebook Site has also been created to protest this film:
http://www.facebook.com/group.php?gid=106926329329724&ref=mf
I might also suggest reading this analysis of the film's offensiveness and the appropriation of trans women's issues in the gudbuytjane blog.
Posted by Gina at 10:25 AM