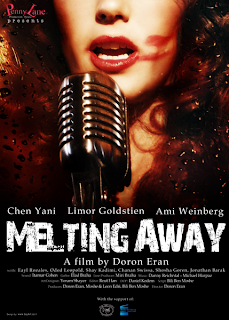 Melting Away is a new film from Israel and the first one in that country to center on the issues of trans people. Director Doron Eran has said the film was partly inspired by the 2009 shootings at an LGBT youth center where he read how media coverage of the event outed a number of the victims and their parents subsequently refused to visit them in the hospital. There's little doubt the film is also greatly inspired by Dana International (Sharon Cohen), the Israeli trans woman pop star who became a controversial icon in that country after she won the 1998 Eurovision Song Contest. Melting Away is not a political film (nor does it make any kind of mention of Israeli/Palestinian issues) and is a small scale family drama which has more in common with a warm and uplifting LifeTime movie but, within its limits, it makes some moving (if highly optimistic) statements about how people's attitudes can evolve. 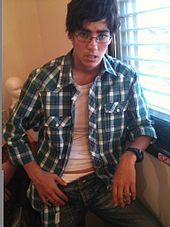 
The film centers around the Shapira family: prickly, domineering dad Schlomo (Limor Goldstein), wife Galia (Ami Weinberg) and 'son' Assaf (played by non-trans actress/model Hen Yanni). The film starts off with the parents discovering their son's secret stash of women's clothes. Schlomo locks Assaf out of the house and, in a heartbreaking scene, ignores the son's pleas to be let back in during a rain storm. We only fleetingly see Hen Yanni portraying a young man—a good thing because she really more resembles a transmasculine person with her pretty, angular and androgynous face—but the audience gets the general idea. As usual in these films, Galia has mixed feelings about what they've done but goes along with her tyrant husband. Four years pass with no sign of Assaf, and the dad is now cancer-ridden and pretty much biding time in a hospice. Galia goes to a gruff private detective to locate their son (they still have the address of their son's gay bud). The private eye locates Assaf almost immediately at a drag club in Tel Aviv and, in a total nod to "The Crying Game" sees the now transitioned Anna sing an elegiac version of the Irish ballad "Danny Boy" (the lyrics reference a young man who is lost but there is someone dying out there missing and loving them... an interesting song choice). Anna initially says she has no interest in seeing the parents who kicked her out, cancer or no.

We next see the hospital with a bedridden Schlomo meeting his new private care nurse sent over by his insurance company... and surprise, surprise, it's Anna in a nurse's outfit and her own father doesn't recognize her! Yes, it's a somewhat absurd conceit of the film how someone who's only been on hormones for 3-4 years is altered enough to not be recognized by their own family... there are some later revelations concerning this which won't be mentioned because they're spoilers. Anna quickly becomes a big favorite of Schlomo's because she's a cute young woman who's doting on him and takes his guff. Eventually we meet Schlomo's younger brother, Itzak, an alpha male just returned from working in London who also doesn't recognize Anna as the person who was formerly his nephew and, almost immediately, starts shamelessly hitting on her. A subplot of the film is Anna's gay friend Shimi and his boyfriend who, rather bizarrely, live under the nose of Shimi's mom who is still in big denial he's gay or that the two are lovers. I have to say I've known parents who were in equal denial about their queer or trans children so, even though it's partly played for humor, it doesn't seem far-fetched. 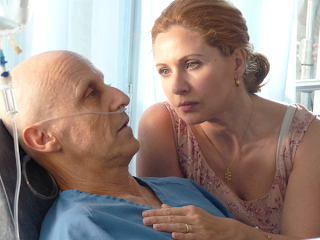 Galia and a dying Schlomo


Without giving away too many spoilers, Nurse Anna is eventually recognized for her former identity by various family members, each having widely varying reactions to her current self ranging from violence, nastiness to complete acceptance. The best part of the film is its performers, who are uniformly excellent. Goldstein and Weinberg as the parents are completely believable and funny when warranted and hugely vulnerable and moving in turns. The actor playing Itzak captures the many sides of someone who can be a total sexist jerk one moment and a person who, after living abroad, finds his mind and level of acceptance is more sophisticated than he even thought. 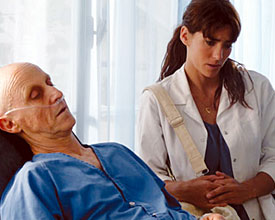 Nurse Anna and her patient

The central figure of the film, played by Hen Yanni, is a hard character to pull off. She's clearly hurt by her parents but still desperately needs their love and acceptance.  She's both passive but also gutsy (or oblivious?) to try and pull off the nurse charade. To its credit, the film make zero attempt to discuss her transition or many other aspects of her life as a woman (with the exception of one possible reference she's done sex work to keep body and soul together). It could either seem hugely naive or extremely enlightened... but it's about time we had more post-transition films about trans people. Ms. Yanni does a good job with the character especially considering this is her first starring role. Maybe she doesn't bring all the depth to it a trans performer could, but she gets into the heart of the person and the woman she's playing and her unique, bony-faced beauty and stature work well for Anna. Nor does she ever give a false or cliched moment... which is saying a lot considering the hokey "trans" performances by many higher profile cis American actors.

Melting Away isn't an earth shattering film about gender or trans politics, but as a story of a family coming to grips with a child they don't understand, denial, abandonment, death and dying, and their own stubbornness, it provides many beautiful moments, no cheap laughs or lazy imagining of trans lives. I have little doubt there will be those around the world who accuse the film of "pinkwashing" life in Israel to eliminate more pressing issues of land, class, religion and separatism. For myself, I didn't feel as if the film erased those issues, but was just concerning itself with a very specific family dealing with a specific set of issues. If you can get past some of the unlikelihood of its central plot, it's one of the better trans-themed films I've seen in the past several years. 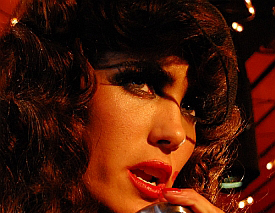