The Singular Identity of Albert Nobbs


"The Singular Life of Albert Nobbs" by Irish novelist George Moore is a short story about a woman in fin-de-siecle Dublin who lives and works as a male butler in a hotel. Many have suggested Moore (who was quite the bohemian and progressive) might have met such a person and written a fictionalized piece about their life. Persons who were born woman-bodied yet lived, worked and even fought in wars as men were not uncommon. Several dozen accounts of them throughout history have been documented (not to mention the likelihood that a great many were never discovered) and a large number of them had their gender histories unveiled only after their deaths.* Moreover, many contemporaries writing about whether this is possible forget how much more often people of 100 years ago encountered visibly 'gender variant' persons, both due to Intersex births (and relatively common conditions like Congenital Adrenal Hyperplasia now routinely modified with hormone treatments) and that hormone replacement therapy or  gynecomastia surgery didn't exist in those days, so any hormonal 'irregularities' could have their full impact in altering one's appearance. In other words, persons of that era were actually far more used to seeing females with large amounts of facial hair and enlarged clitorises or males with 'hairless faces, breasts and curvy bottoms.'
George Moore boho'ing it up as drawn by Manet

Feminist hero, butch breakout or dude?
For many years, such cases were mostly seen as women who 'wanted adventure' or more opportunity. In the 1960s, a number of feminists started referencing these stories as examples of proto-feminist rebellion who refused to fall in line with a brutal patriarchy. Later in the 70s-90s, many lesbian activists promoted such cases as early examples of butch women who refused to be trapped in women's roles and used a male identity to work and dress in thinly-veiled female masculinity. A prime example of this was Diane Wood Middlebrook's 1999 controversial biography Suits Me: The Double Life of Billy Tipton about a jazz pianist who was found to be female-bodied only after his death.

In Middlebrook's opinion, Tipton is a feminist heroine who lived in drag to enter the male-dominated world of jazz. Many trans and queer activists felt her work dismissed the trans angle of Tipton's life. That living 24/7 as a man including in a marriage and as father to sons involves more than "wanting to enjoy the privilege of a man's world." They argue that Tipton was, more likely, a trans man. I mention this because Moore, who supported early forms of feminism and likely wrote the story as a parable of a woman escaping a hardscrabble existence (although, unlike the movie, there is no mention of Albert being sexual assaulted in the book and he first 'cross-dresses' because of unrequited love), might have made conclusions from meeting a real life 'Albert Nobbs' that were not informed with insights that even someone like Marcus Hirschfeld might have been able to provide 30 years later. Simply put, Moore might have met a woman in hiding, or a butch gender variant woman or a trans man and not really been able to even conceive of the difference. But he understood what he wanted this 'Albert' to represent, much as Wood Middlebrook did in her biography.

Let's all go to the movies
Which brings us to the new film adaptation of Moore's story shortened to "Albert Nobbs" directed by Rodrigo Garcia (a stalwart of many HBO projects) and starring Glenn Close as the title character (who first played Albert in an early 80s Off-Broadway stage adaption). In Close's version of Albert, he's an odd little Dickensian character from another planet... with a washed-out, constantly fearful, deer-in-the-headlights look about him. He scrupulously counts his tips and wages and hides them under the floorboards of his small barren room in the servants' quarters of a B-level hotel in Dublin, biding his time until he can live out his ultimate dream: buying an 'umble little Tobacconist's Shop in a rundown part of town. Unlike the rest of the staff, he has little sense of humor, is seemingly asexual unlike his raunchy co-worker, the tarty maid Helen, played by Aussie actress Mia Wasikowska.

The hotel's workaday world is changed when hot bad-boy handyman, Joe (Aaron Johnson, who recently played John Lennon in Nowhere Boy), b.s.'s his way into the staff by charming the frumpy, cougar hotel owner (Pauline Collins, formerly of Upstairs Downstairs). Meanwhile, the hotel employs the boisterous, strapping painter, Hubert Page (played by classical actress Janet McTeer) who, Nobbs finds out, is also female-bodied but living as a man. Nobbs starts obsessing over the fact that Page has a wife and lives in domestic bliss on the outskirts of Dublin in his own tidy cottage. He rather absurdly glomms onto wild girl Helen (who has already been knocked up by Joe) as his future mate and starts daydreaming of connubial bliss with wifey, Tobacconist shop and a cozy parlour room as the center of his future world. He further states this will last 15 years after which they will live by the sea.


The real deal... a sworn Albanian.
POSSIBLE SPOILERS
Close has said she based her performance on a) Charlie Chaplin and; b) A National Geographic Documentary she saw about the "Sworn Virgins" of Albania (women who completely chose to live as men except they make an oath of celibacy). And here is where I think her performance as Nobbs was neither especially convincing and, in some ways, ill conceived. Yes, like Chaplin's tramp, Nobbs is a lower-class character (although far from the bottom of the barrel) and the film shows numerous examples of class distinction and even oppression (as do many of Chaplin's shorts inspired by his childhood in the East End of London). But what Chaplin's tramp and other lower class people usually have is a humor, snark, worldliness and resourcefulness which Close completely lacks in her performance. The "sworn virgins" I've seen are tough as nails characters who don't take crap from anyone and look like old weatherbeaten sailors.

At one point in the film, Nobbs admits to Mr. Page that he was brutally raped in his early teens and, shortly after that, started live and work as a male and also, perhaps, refuses to remember (or forgot) his given birth name. The film seems to be making a point about a woman who escapes from the horrible treatment of lower class women yet, in the process, loses herself and dons the protective yet dulling armor of manhood (albeit a very mealy-mouthed version of it). But this is nothing whatsoever like any of the historic stories of women who lived as men, who tended to be highly resourceful, even daredevil and were anything but passive. My other issue with Close's performance is how naive and childlike the character appears (an update of Peter Seller's Chance the Gardener in 'Being There'). As someone who has "switched gender presentations" (albeit as a trans person) I know not only how profoundly difficult it can be, but how it also bestows a strength and wisdom about gender and people that perhaps can only be learned from some such experience. All Close shows is the fear, wishfulness and spiritual shrinkage but none of the resultant power and tensile strength. 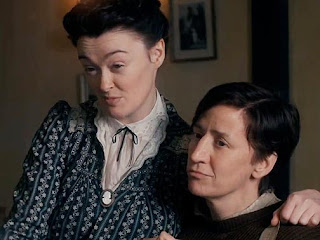 At home with the Pages... Hubert and saucy Cathleen.

MORE POSSIBLE SPOILERSIn one the few funny scenes in the film, after Mr. Page's winsome, seamstress wife (played by the always wonderful singer and actress Bronagh Gallagher) dies of Typhoid, Nobbs and Page don dresses she made as a bizarre memorial to her and to their distant memories of womanhood and have an initially uncomfortable surreal, and draggy stroll along the beach (a scene created for the film, it's not in Moore's story). It's also the one part of the film where Nobbs looks completely joyous and free. Are we to take from this he's happy to finally be back in a dress and dreams about returning to life as a woman (although there's no other reference to this wish in the rest of the film and the dress is gone shortly after) or that he's overjoyed to find a friend who knows of his life story or that he's just happy to be by the sea? The scene basically leads to... nothing. Without going into the ending (which is also written for the film and not in Moore's work), at one point Nobbs gets involved in a fight between the yelling boyo Joe and loopy Helen, a choice which I found altogether unconvincing. He seems to have zero concept that he could potentially face violence in this situation even though the film previously suggests he's living out some form of PTSD from his prior rape. Again, Close opts for the poetic Chaplinesque gloss and ignores some of the more logical, life-learned realities which might have provided a deeper experience. 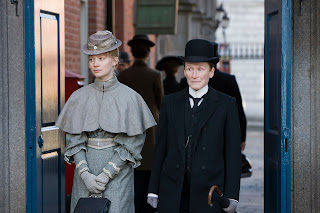 Albert & Helen out for a stroll.

Still, there is much to like and be moved by in the film: terrific performances by just about everyone (other than Close?) including the creme of Irish actors like Brenda Fricker and Brendan Gleeson. A fun turn by the always cheeky Pauline Collins and Aaron Johnson does a truly great job as a thoroughly unlikeable but class-scarred, sexy loverboy Joe. Janet McTeer has won all the top raves from virtually every critic as Mr. Page (and very likely an Oscar) and, for the most part, she deserves them. However... her Page lacks a genuine wizened and tough exterior that even blue collar women (and working class butch women) seem to have. Despite her 'amazonian' size (sorry Janet, I'm tall too), she looks soft and educated, not pub-fueled or pugnacious. Good an actress as McTeer is, I couldn't help thinking that a real butch or transmasculine person who acts could have done this several times better.

Close but no cigar
And Close is... well, a Broadway actress extraordinaire (that's not a compliment). The acting is carefully thought out yet always visible. Can she be moving in her constructed character... yes. But I always felt as if I was being manipulated to getting teary, much like the sappy, too-modern Sinead O'Connor song over the ending credits. Let's face it, like Barbra Streisand in Yentl, Ms. Close is several decades too absurdly old for the character, which has an impact of making the 'romantic quest' with a young person look way creepier. Fortunately, this is only a small part of a film, which Garcia has given a sombre and greyed-down period look and, unlike Close's performance, seems utterly believable and effortlessly claustrophobic. Its meditations on class seem completely contemporary as we watch the mini-parade of 1%'er hotel guests get full value for their dollar by humiliating the staff.

Are Albert Nobbs and Mr. Page trans persons? Of course we'll never know (nor did George Moore who probably never even knew what a trans person was)—it's kind of like asking "was Sherlock Holmes gay?" They are creations of their time yet filtered through the intentions of contemporary filmmakers. Hard as living as an oppressed woman is, it's likely even more difficult "choosing" to live as a cross-gender expressing person and certainly more dangerous. If nothing else, it took a will of iron and gritty spirit to occupy such lives and ethereal and pitiable as Albert is portrayed here, I don't find him credible. Albert Nobbs is well worth spending several hours with but you might find your attention wandering away from the main story and, instead, wishing the film were about Mr. Page and his saucy wife.*A terrific source of information about these cases is Zagria's excellent blog "A Gender Variance Who's Who" which details many such people.
Posted by Gina at 5:13 PM