Let The Right One In: Trans Fade to Bland

Let the Right One In is a novel of vampire fiction by Swedish writer and performer, John Ajvide Lindqvist. Lindqvist, who was first known in his country as a comedian, wanted to create a serious book which channeled his pain growing up in a dumpy, hardscrabble suburb of Stockholm during the 1980s and the intense bullying he faced as a tween. It's set in an endlessly snowy landscape with nearly 18-20 hours of daily darkness (which would make it seem a natural for Vampires... certainly more than New Orleans). Most of the adults in the book are alcoholics and everyone lives in dreary public housing. His concept morphs into a vampire story when he has his browbeaten protagonist/loner, 12-year old Oskar, meet a girl named Eli (seemingly the same age) who just moved into the run down apartment next door with her father. 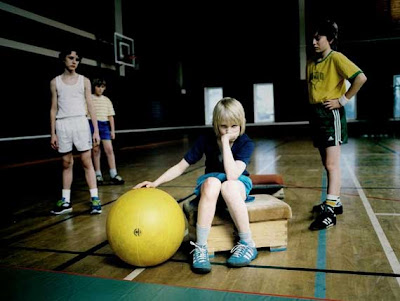 Oskar about to be bullied

Father and daughter are a strange pair. The middle-aged father talks to none of the local lushes and doesn't seem to work, while daughter goes around barefoot in the snow, has greasy, matted hair, is intensely asocial and never comes out during the day. The windows of their apartment are covered up with cardboard and duct tape. Yes, it turns out this girl, Eli is, in fact, a 220-year old vampire and, in a trans twist, was born male.

Three different versions of Eli. (l) From the original
book cover; (c) from the Swedish film;

(r) Abby in the English remake.

Lindqvist's book became hugely successful in Sweden and, eventually, in Europe as well. In short order it was made into an internationally acclaimed 2008 film by Swedish director Tomas Alfredson which has since become one of the top cult films of the last 10 years. Ultimately, its English language rights were bought by Hammer films, a British studio famous for its horror output. This US-based remake by Matt Reeves (best known for his film, Cloverfield) called "Let Me In" has just been released. After seeing both films, I can honestly state the recent remake is a slick, cliched imitation of Alfredson's original film which is an elegiac masterpiece about loneliness and addiction (and actually far more frightening than the remake). But what is especially interesting is to see how Lindqvist's trans-related themes, which run strongly throughout the novel, get differently digested (and edited) in the two subsequent films.

Time for a job eval
In the book, much is made between the pedophillic relationship between seemingly young girl Eli and her "father" Håkan. It turns out she met Håkan when he was a homeless alcoholic, took care of him and paid him on one condition... that he murder people for her so she can have a steady supply of blood to drink. In the novel, Håkan is sexually obsessed with her and says he would gladly kill for her for free if she would love him. By the time he's an older man, Eli cares about him but is frustrated by the dysfunctional human he's become. He's now only good for one thing and he even manages to have problems finding her a proper food supply.


A girl with a history
Along the way, in all three versions, Eli and Oskar haltingly become close—two outsiders who've found each other. At one point (also in all three versions) they hug and she shyly asks, "would you still like me if I weren't a girl?" When I saw original film, "Let the Right One In," it was at the Castro Theater in San Francisco. No one reacted to this line. When I saw the remake "Let Me In" it was at a multiplex in a suburb south of San Francisco and the same line elicited big laughs. In the book we find out (by way of a tender fable Eli tells someone she's about to suck dry of their blood) that she was the youngest, very beautiful boy in a poor family. Because the boy was small and not very useful for farmwork, he was given up to a nearby lord (who presumably made him into a vampire). 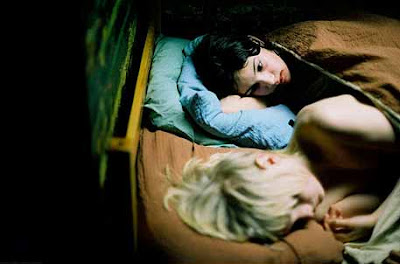 Eli naked in bed with Oskar. He wonders:
"will you be my girlfirend?"

In the book, Eli continues to ask Oskar for his feelings about someone who isn't the gender she seems. She ultimately tells him her name was formerly Elias. He obsesses more over the fact she used to have a boy's name than the fact that he's now figured out she's a vampire who has been responsible for many local deaths.


Show and tell
At one point in the novel, when the two are alone, she willingly reveals her naked body to the overwhelmed Oskar. She is described as basically having no genitalia, having a scrawny body with long limbs and zero curves. He asks what happened to her penis. She makes an awkward joke that she left it on the subway! Oskar is confused but laughs along with her. In a 2008 interview, author Lindqvist stated, "Eli is supposed to be a boy, a castrated boy." After Oskar sees her genitals, he worries he's a "fag" which he is called by the bullies at school and now, because he's in love with a boy, it's come true. 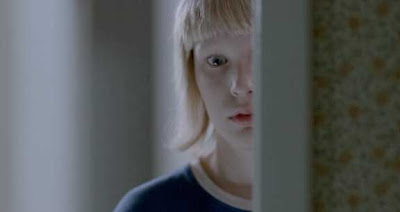 Oskar is initially shocked by what he sees

In the Alfredson film, Oskar instead sneaks a peek at Eli while she's naked (she's just showered off a large quantity of blood) and sees a quick glimpse of what seems to be the crude results of a penectomy/castration but not typical female genitalia (and granted, the rather insular Oskar probably doesn't know what typical female genitals look like). The Swedish film has Eli played by the haunting amateur child actress Lina Leandersson, who has a powerful presence and pathos in this role. She looks like pre-teen version of Joan Jett who's been living in filth and malnourishment for the past year (or is it 220 years?).


Curiously, the director, at the author's instigation, had the young actresses' voice dubbed at the last minute because they thought it was too high and wanted it to sound lower and more androgynous. The final effect is that of someone who's seemingly sexless both from her addiction (blood) and her inability to properly take care of herself. There is never any mention by Oskar about his concern for being moony over a "boy" but given rapturous responses I've heard from moviegoers of all genders, it's hard to see the film and not find yourself with a crush (or, at least, extremely maternal/paternal) towards Eli/Leandersson. 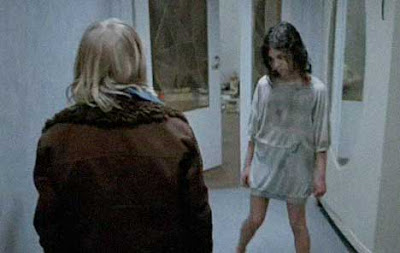 Put the body back in the casket
In the new Reeves version, they just show a reaction shot of Owen's (the American version of Oskar's) face when he looks at Abby (the American name for Eli) naked in the bathroom and, basically, don't show anything. From the audiences' lack of reaction, I'm assuming they had no idea why he had a look of surprise on his face. Later in the film, Owen asks Abby, "If you're not a girl what are you?" She replies, "I'm not really anything." The actress playing Abby (professional child actress Chloe Moretz who made a big splash in the film Kick Ass) looks far more female and more girly in this version of the story. She's still without curves and, at certain points, I swear they padded her shoulders to make her look more male-bodied. But Moretz is a pretty girl who, with the right makeup, might look like a standard issue teen model on the cover of 17 Magazine. Needless to say, it pretty much ruins the impact of the character and buries the entire gender thread from the novel. 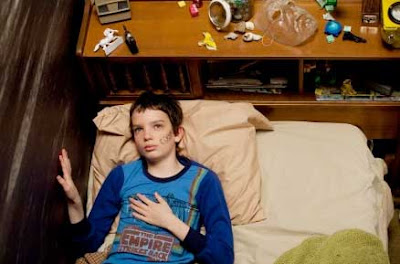 Owen listens to one man berating another man

In a somewhat bizarre scene from the English language remake, Owen, listening through his shared bedroom wall into Abby's apartment, can hear muffled sounds of Abby berating "The Father" (as Håkan is called in the English version) using a voice which sounds like an adult male. This scene isn't in the book, so it's an invention of the director's... obviously as a way of bringing out some sense of Abby really being an adult male. It happens twice in the film and then isn't repeated while we can actually see her. It seems to have an undercurrent of the "born a man" line which trans women after get tossed at them. 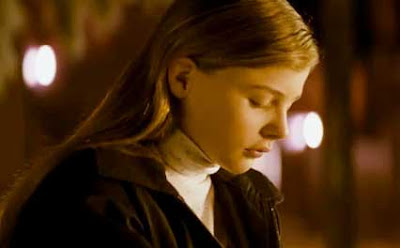 Abby, the new cleaned up version of Eli

So much of the Eli's outsider status comes not just from her addictive need to drink human blood, but because she's basically a trans girl (or perhaps a forced eunuch like David Reimer?) who is incredibly insecure about how people see her and what she offers the world as a girl—mirroring Oskar/Owen's owns insecurities about his masculinity. In the Alfredson film which, although it edits down this thread from the book, I still think it would be impossible for a trans person to see this version and not have it profoundly resonate with them. In the English film version, so much of this powerful character revelation has been whitewashed. 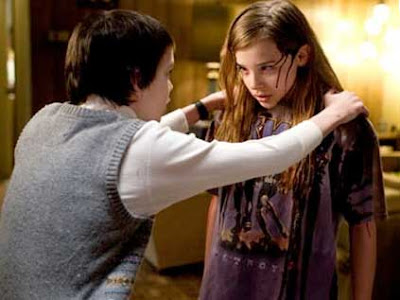 Bland acceptability at any cost
It's so frustrating that, especially American filmmakers, don't believe honest trans storylines and characters will go down well. In another recent film, The Extra Man (starring Kevin Kline and based on the novel by Jonathan Ames... the subject of an upcoming post) two very major scenes in the book involving the main character's sexual relationship with trans women are hacked to pieces in the film version and mostly replaced by his crush on a very minor, uninteresting cis-woman who's played in the film by Katie Holmes (to terrible reviews). As it was, perhaps the most interesting part of the book was homogenized into a story line no one cared about. And this accomplished what... trans erasure? The film quickly sank into poor reviews and oblivion. Likewise, perhaps the most intriguing thread in the Lindqvist novel, effectively digested (yet toned down) in the Swedish film, is only to be obliterated in the flat, generic English remake (the vampire even wears uber cliche white contact lenses when she's thirsty... scaaaary).


Put the body back in the casket
And so it goes. Evidently, from the uncomfortable laughs in the audience at the remake version, much of our culture is so insecure about the "tranny tricked a man" trope that they're willing to strip a work of one of its most intriguing aspects only to replace it with dreary subplots and special effects which have been (excuse the pun) done to death rather than feel any gender discomfort. While reading commentary about the various versions, I came across a serious discussion on an Internet forum about the "Crying Game" scene from Let the Right One In and asking "would they have it in the English version?" None of the people responding to the thread said they thought it would make it into the new film. Yes, the very idea of a lonely boy tenderly falling in love with some flavor of trans girl is worse than people having their jugulars torn open by a vampire. 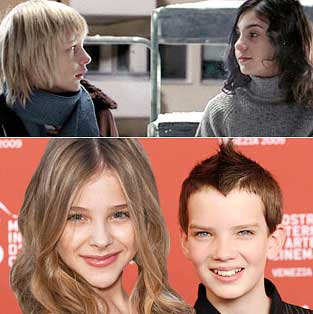 Top: the Swedish version of Oskar and Eli
Bottom: the actors who played Abby and Owen

Labels: John Ajvide Lindqvist, Let me in, Let the right one in, Matt Reeves, Tomas Alfredson