WIldness: gentrification as an art installation 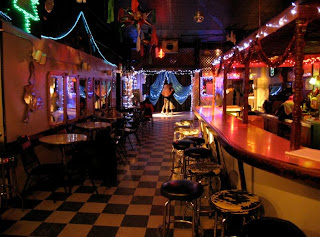 Wildness is a recent documentary which premiered at LA Outfest last May, showed at last year's Frameline Festival and South by Southwest but is only now playing the US LGBT festival circuit in a broader way. It's directed by queer artist Wu Tsang, (who uses male pronouns on his website) and written by Tsang and Roya Rastegar. It concerns an old school Latino gay bar, The Silver Platter, on the edge of LA's MacArthur Park (where someone left the cake out in the rain) but, in recent decades, has specifically become a gathering place for trans Latinas. It's a complex film (or really, several interwoven films) together with a meta aspect of self-critique as befits Tsang, who is primarily a performance and installation fine artist with some impressive credentials. 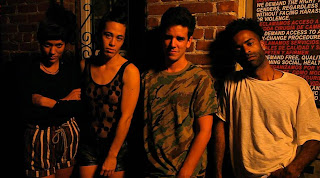 The film starts out with a highly self-conscious narration of the bar speaking for itself in the voice of one of the trans women who frequent it. The narration talks of the bar's history, the women who find their relaxation away from being marginalized, waxes poetic about the neighborhood, culture, queerness, etc. At no point does Wildness or its credits explain who wrote this narration (I'm assuming Tsang and Rastegar) and, for what's ostensibly a documentary, quite a bit of commentary is snuck into  this aspect of the film. It segues into a fairly traditional documentary portrait of "look at the gender variance... isn't it fascinating" in much the same way Diane Arbus or many others have previously done. We meet the bar's owners (an older latino man, his gay son, the son's lover and the older man's cis daughter, who is essentially the manager).  A telling moment is when the owners, other than daughter, say they're kind of uncomfortable the bar became increasingly frequented by trans women and how they liked it better when masculine gay men were their customers. The trans women from Mexico and elsewhere in Central America are shown doing lip syncing, (of course, putting on their makeup) sharing laughter and letting their hair down. Most are skewed older, except for a 20-year old trans woman who is one of the main camera subjects. 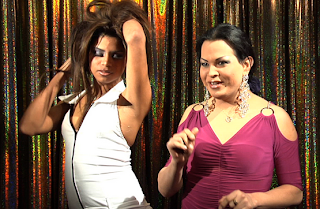 But 10 minutes into the film, it takes a sharp left turn and Wu Tsang is introduced as the film's central figure. The queer, androgynous Tsang moves from Chicago to LA, is looking for community and decides the Silver Platter is it. It's from here that the film veers heavily into New Journalism. As I mentioned in a prior post, New Journalism was pioneered in the 60s by Tom Wolfe, Gay Talese, Truman Capote and others as a genre of non-fiction with a stylized and fictional coating to it where the author and their search for answers becomes one of the main characters and core of the work. It breaks through a false assumption of documentary impartiality but can also make a documentary subject so personal and shot through the filter of the artist/writer/filmmaker that it starts to resemble fiction (which can also make it highly entertaining). In fairly short order, Tsang gloms onto the club and convinces the owners (who, I'm sure saw Tsang as a young, very educated queer hipster with connections to white club kid dollars) to give him and three of his cis friends Tuesdays at the Silver Platter for an ongoing party night which they name "Wildness." It quickly becomes an upscale queer/performance art scene celebre but with zero connection to the trans women who inhabit the club the other six nights. The other three people who run the club with Tsang seem to lack any identification with the seedy trans space they're pretty much cannibalizing for its coolness quotient. Tsang keeps focusing on the idea of "safe space" for these trans women with little thought that what he's morphing the club into is something they can neither afford or really ever likely to belong to. 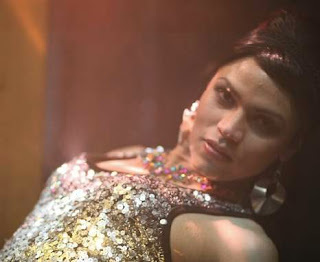 Within a few months, the club becomes fabulously successful but also a harbinger of gentrification to come. Eventually, the LA Weekly wants to do a story on it (pretty much the uber-hipsters' death knoll that's sure to flood it with college kids, celebrity scene tourists and suburbanites). In a painful to watch section, gay columnist/club slug James St. James drones on mindlessly about the "trannies" at the club and you can palpably hear the queer clubbers and their wannabe allies leering at the "Mexican transvestites... har, har." The article in the LA Weekly not surprisingly turns out to be a nasty piece of transphobic objectification droning on and on about trannies, he-shes and shemales. Tsang is outraged, waging an internet campaign against its social activist author, Sam Slovick and finally forces Slovick to apologize to him. The film never really asks what Tsang's part was in this debacle nor clarify if Slovick and the paper ever really apologized to the women at the club or its ownership (which, while they didn't like the tone of the story, seemed to be glowing in the piles of money rolling in from "Wildness" nights).


Along the way, Tsang gets involved in some of the internal politics of the club and naively questions whether their hyper-successful evening of artsy hipness is throwing the equilibrium of the space off-kilter (duh... something which the trans women clearly express in a guarded way even if they're curious about the interlopers). Ultimately, flush with success, the Wildness team rent a storefront next door and try to open a legal clinic for trans women. It's a good gesture, but I couldn't help thinking they were doing some kind of penance for potentially stealing this space from the women... one of the few for trans immigrants in LA. I won't tell the outcome of the story but, needless to say, the Silver Platter is still there, hugely more expensive than it used to be, and it you look on Yelp, it's all younger white kids talking about the transsexuals and "transvestites" and the now pricy drinks. Yup, it's pretty much become an 'Africa USA' kind of "watch the trannies" safari (there are other spaces like this, such as Lucky Changs in NYC and AsiaSF in San Francisco... overwhelmingly for cis well heeled patrons to ogle at trans women of color).  I suspect this film was ultimately good publicity for The Silver Platter after all. As so often happens with gentrification, the earlier outsiders/developers who move into the minority space make initial attempts to "honor" the history of the neighborhood before the drink prices shoot up to 4 dollar signs.


The film shines in its capturing the environment of the neighborhood, the moment in time (2008), the sounds (it has a great salsa and electronica soundtrack) and, when it allows the women to speak for themselves, can be quite moving. It also has a certain level of self-examination about Wildness, its cultural and trans appropriation... but never probes too deeply or bothers to ask what queerness really means for these women and if there really is an LGBTQ community which unites because of Wildness (which the film tries to limply suggest). This makes it perfect for LGBT film festivals which love to believe such sentiments as they show films about gender variant people of color yet overwhelmingly cater to cis, white, middle-class patrons who very likely know few trans people much less trans latinas).


I walked away from seeing "Wildness" with WILDLY mixed feelings about Tsang. He tries to posit himself as "one of The Silver Platter girls," but considering he doesn't speak Spanish and his work has been seen at the Tate, Whitney and umpteen Biennials, I'm skeptical about him blending in with impoverished trans women from El Salvador who are in the US without papers. He clearly loves the women and cares for their well being but the film never really delves into what they think of him, his continually filming them (the film suggests a fair number are afraid of the INS finding them), his gender presentation much less his friends (who sound nothing if not condescending towards the women).

Wildness, the documentary, ultimately churned up a lot of feelings for me about race, class, gentrification, trans vs. queer vs. gay and even what gets to be defined "art" and what isn't. Personally, I loved seeing the performances by the trans women and drag queens and found myself cringing at the 25-years-on Pyramid Club ripoff fare offered up by Wildness and its craaazy, 2008-and-still-punky habitues. What I valued most from the film was the questions and contradictions I felt it (inadvertently?) posed while most of the narration and ongoing soliloquies by Tsang I found self-consciously earnest and motivated by his inner fear of  coming off as an appropriative artist jerk. In the end, he seems like a nice, sincere queer person but really, androgynous or not, yet another artist explaining the 'transgenders' he got to know. I kept feeling this story would have been better told by another filmmaker who could have given real, honest perspective about the cultural and class tectonic jolts suggested in Wildness without being the film's pivot point.
Posted by Gina at 11:52 AM