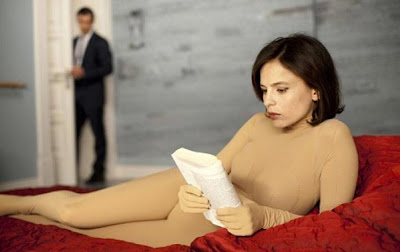 "The Skin I Live In," is Pedro Admodovar's 18th film and, perhaps, his most talked about since "All About My Mother." It's a welcome switch from his recent, perhaps more sedate films featuring Penelope Cruz. "Volver" and "Broken Embraces" took a mainstream detour and eschewed some of the queer, gender-skewed and trans themes of his earlier work. This newest offering reminds me more of his 'second wave' of films like "Tie Me Up! Tie Me Down!" "Kika" and "High Heels" which fixated on vivid obsessions, fetishistic fulfillment and vengeance. While he doesn't use any trans performers (such as Bibiana Fernandez or Antonia San Juan) he puts trans themes and medical procedures squarely in the center of the film.

"The Skin I Live In" has echos of Hitchcock's "Vertigo," Pasolini's "Salo," most obviously Franju's "Eyes Without a Face," and 60s films like William Wyler's "The Collector" and Michael Powell's "Peeping Tom."And like all these films (except the more sadomasochistic Salo) this one falls into the creepy/voyeuristic but largely not gore-laden Thriller category (I suspect many younger gore fans won't know what to make of it). Because it's an Almodovar film, there's always a heaping side-order of a Joan Crawford and Douglas Sirk potboiler/soap opera dripping off the side of the plate. Yet Almodovar is always brilliant at offering up these homages & influences in a way that's far more original, integrated and subtle than American director's tend to do. 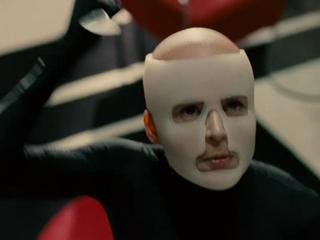 Antonio Banderas plays an intense, successful/rich-as-all-getout plastic surgeon with the wittily unlikely un-Spanish name of Robert Ledgard. Ledgard lives in a luxurious walled-off mansion complete with its own surgical center and la-bor-a-tory. The other two tenants of Ledgard's house are his housekeeper Marilia (played by Almodovar's favorite actress Marisa Parades) who might be the surgeon's birth mom, and Vera (played by Spanish star Elena Anaya), a young woman with a mysterious past. Vera is dressed in a tight bodysuit and mask similar to that worn by burn victims but occasionally displays her silky smooth complexion. She is locked in her starkly empty room, constantly monitored and largely passes the hours doing yoga and watching vacuous tv fare like National Geographic Channel.

Legard spends much of his private time leering at her on an HD close-circuit camera, looking at Louise Bourgeois artwork, offering Vera opium to smoke to aid her in forgetting her painful past and working on an experimental artificial skin (created from pig skin) which is largely fireproof and resistant to mosquito bites. Think of a Spanish version of Colin Clive's Dr. Frankenstein in the 1930's James Whale films only Spanish, gorgeous and living in a Euro-house dream which belongs in Town and Country and you wouldn't be too far off. At one point Almodovar turns the camp up and shows the crazy doctor concocting his artificial skin which, for the life of me, reminded me of when Gene Wilder as Willy Wonka created Everlasting Gobstoppers. Pretty much from the get go, we know there's some sick medical creepiness in the offing, and Almodovar doesn't disappoint. 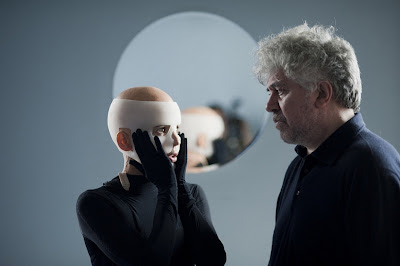 Without giving too many of the film's secrets away (certainly not the twist at the end) mad doctor Ledgard is getting revenge on a young how-could-he-be-straight, delicate prettyboy named Vincente (Jan Cornet). The doctor believes his daughter, Norma, was raped by Vincente at a party, which sent her over the brink of madness whereupon she eventually took her own life. Vincente is captured, drugged and, in a loooong sequence. is chained up in a garage as Ledgard plots his eventual cruel fate. Ledgard rather improbably retains the services of a doctor who does SRS who agrees to do vaginoplasty on the young man even though he wasn't on hormones. In a rather fetishistic bit of black humor, Ledgard gives the post-op Vincente a lesson in post-SRS dilation! (was I the only one in the theater comparing the dilator sizes to my own set??) In a bit of movie magic, Vincente is then operated on from head to toe and, after revealing themselves from their body suit, now looks like gorgeous Elana Anaya who also looks a great deal like Ledgard's late, disturbed daughter Norma (and miraculously, the 3 performers do actually greatly resemble one another). Going several steps beyond the kink in Vertigo, Ledgard and the now renamed Vera have sex while the film obsesses over her too-tight post-op pussy.

So, is a film featuring a vaginoplasty, a 'man turned into a woman', dilation and forced feminization a trans film at heart? Well, not really, but it probably depends who's watching it. For myself, as a trans woman, it more resembled a warped Architectural Digest-glossy sicko version of David Reimer's life—that of someone who was forced feminized for repulsive 'scientific' purposes. Echoes of Reimer are all throughout the film including Vera's defiance about retaining her gender identity. The film definitely exploits many people's queasiness about trans medical procedures to turn up the squirm factor. It also uses a cis-audience's ignorance about trans issues to connect with the trope of "what if you get a sex change and 'change your mind??!!'" (although Vera never chose to transition in the first place, once her original identity is known, the thought is placed in the audience's mind) And, like many gay men who, perhaps, have their own unresolved gender issues (even if they don't ID as trans), Almodovar loves to skirt (excuse the pun) around trans issues with a perhaps more gay male than trans rumination about identity, whether one's gender is defined from the outside in or the inside out and wanting to be a sexy woman to, ahem, nail the ultimate hot straight guy. Yes, the director does deal with questions about Vera's internal ideation of herself which I won't go into further. But mostly, it's a very slick version of 'forced feminization porn' stories which are rife on the Internet—and I don't think Almodovar would be insulted by that comparison. 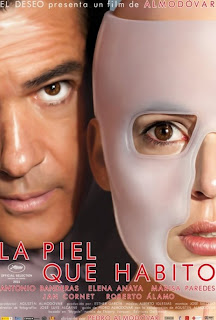 All of this is beautifully acted by Banderas (better than he's been in decades) and with a truly standout performance by Anaya. The cinematography is like leafing through an expensive book of fashion photographs, each shot lovingly styled into a banquet of upscale eurotrash. And the emotional core of the film is certainly Alberto Iglesias' powerful score. Almodovar is, as usual, brilliant at how he incorporates music as an integral performer commenting and pointing to the action with a mixture of melodrama, camp and ultimate dread. The only section of the film which didn't always spark was the long flashback of the party where the possible rape occurred. Again, Almodovar loves the Douglas Sirk flashback sequence like no one else and relishes the obviousness and cliched aspect of the technique but a bit less exposition and more mystery would have turned up the film's emotional and suspense impact.

Don't expect any reality about transition in "The Skin I Live In"... it flits over issues like hair removal, voice surgery, skeletal structure, etc. etc. etc. It's a fantasy view of "transition is about getting getting a sex change and a neo-pussy and then you become a woman... kind of." But Almodovar has no qualms about the mad handsome, straight doc doing the dirty with his trans-bodied creation. This is, perhaps, the most bizarre lapse (or conceit?) in the film, how a man would want to have sex with the person who he thinks raped his child, no matter how transformed into a gorgeous Euro-starlet they are. But maybe that's the director's point... that men can look past virtually anything when it comes to their monstrous love for their passion objects? 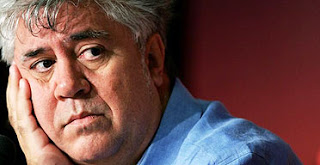 "The Skin I Live In" is mostly about Almodovar's obsession about processing his own gender and sexuality... from all different sides including the loving, erotic, intimate, filthy, creepy and scary. I suspect, like some (not all) gay men, he had dreams/nightmares as a youth about what transitioning might be like, who he would attract, how would he look, what it would be like to have a vag and would he ultimately come to regret it. It's all in this film as are so many other aspects of sexuality/relationships be it "owning" and remodeling one's partner, voyeurism and projecting old loves onto one's current 'victim.' (all great obsessions with Hitchcock as well). Trans people seeing it might be either repulsed, angry, think it's a big hoot or feel hugely empathic towards it as a work of art. In my case it was all of the above. Mostly, I was just very glad to see our most talented gay-male trans fetishist, Pedro, was back in his groove.

ADDENDUM TO AN ALREADY LONG REVIEW:

I've seen a lot of concerns about ruining "the surprise" or "the twist" in the film. Personally, I refuse to accept the marketing of the film which would include the salacious idea of "the beautiful girl is really a dude." Too many trans women's identities have been disrespected in films this way. Too many rapes of trans women have been disregarded because of the "she's really a dude" excuse (as though someone born in a male-assigned body can't be raped??) I would like to encourage queer and trans people to purposely spread "the Twist" to this film. Trans or Intersex surgeries, bodies or identities are not about fooling the viewer, for shock/sleeze entertainment or titillation.

Labels: Admodovar, Anaya, Banderas, The Skin I Live In