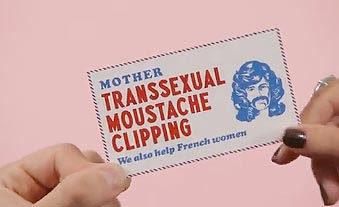 Thank you, creatives at Mother, NY! Nothing like
a man in a wig with a mustache to say
tranny loser! har har *slaps knee*
Mother, NY is an award-winning (2009 agency of the year as determined by Creativity Magazine), hipster ad agency which often uses humor in ads. They're best known for their whimsical, widely seen commercials for K-Y and Stella Artois but other clients include Diet Coke, IKEA and even Amnesty International. Recently, to publicize their move from lower Manhattan to Hell's Kitchen in midtown Manhattan, the wits at Mother, NY came up with a pfuuuunny little promo piece called: Transsexual Barber shop. *chortle*
NOTE: the section being discussed starts at point 2:09 in the video.
Commodified Creativity
Here's the concept, we all know trannies (the MtF kind) have facial hair, right... RIGHT? So how about a barber shop which caters to these creatures? A barber shop (which are for men, get it?) which can trim the mustaches of men dressing like ladies (which is the definition of the word "transsexual") Mother, NY reasons, if we can show our creativity in promoting such an outrageous concept as that, we can advertise anything plus it will showcase our outrageous sense of humor and ability to break boundaries. *guffaw* 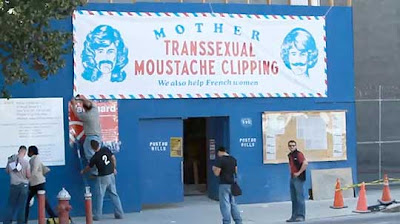 Is this OUTRAGEOUS or what?
The video features a shot of their new "shop" with a huge banner saying "transsexual mustache clipping" (which is represented by images of men with mustaches wearing wigs). Just to add a double dose of outrageousness, the wags at Mother, NY also include a line saying, "We also help French women." In case you don't understand the humor in this line, just follow me: 1) the women in some ethnic groups have more facial hair than others; 2) facial hair on women is just gross; 3) all Americans hate the French; 4) C'mon, it's just funny, lighten up! *raucous laughter*

Haha, transsexuals = FAIL
After showing a series of transsexuals with facial hair they then take it to the streets and interview boring people what they think about the transsexual hair styles. At one point, they ask a professional looking woman, "would you tell your transsexual friends about the transsexual barber shop?" She responds by looking stumped, and then replies, "probably not." Now is this response supposed to mean, "what, me, have transsexual friends?" or "no, because this 'joke' would likely offend them and make them think less of me because I would stoop to making a stupid joke at their expense?"
At the end of the piece, while scrolling through a list of all the services, real and hee-larious, which Mother, NY provides, it lists "transgender pruning." Yes, the transgenders are a hopeless bunch and need help in their pathetic quest to blend in. Thank you advertising peeps, we all need a laff. I want apologize for the blacks, handicapped people and Asians who won't allow you to include them in your 'fun'... but there's always us transsexuals. And advertising professionals such as yourselves have definitely come a looong way since the smug, entitled, sexist ways of the Mad Men crew. Right? ...RIGHT?! *ROTFLMAO*
10/19 Update: The offending video was removed from YouTube although it still exists in the compilation video shown above. There were individual apologies sent to people who wrote Mother, NY but no corporate-wide, publicly available statement as to why they did the piece and why they removed it. 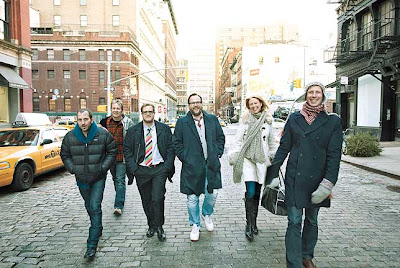