I Am J: Boy Meets World 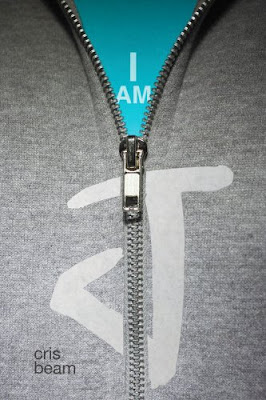 I Am J, a new young adult novel by Cris Beam, concerns a trans boy coming to terms with his identity and the realities of dealing with transition, school, his self-expression, disclosure of trans status, housing, family, friends and his love life. It's a lot to cram into one quickly read book and there are times when Beam's work comes across as a somewhat rote listing about "what trans teens go through" as written by a well-intentioned social worker or counselor. Fortunately, the novel is written with a compelling directness and clear prose which vividly projects the packed story forward. It's a story most teens (and the book is perfectly enjoyable by adults as well) will gobble up—it could be a gritty Afterschool Special on T and steroids. And Beam, more than most non-trans writers, clearly knows the world and youth she's depicting.
A New York Frame of Mind
J (his assigned birth name started with the same letter) is a confused young person in his last year of high school in Washington Heights section of NYC living with his oblivious and homophobic Jewish dad and somewhat smothering Puerto Rican mom. His best friend is modern dancer, Melissa, on whom J has an unrequited crush. He is viewed by his family and school as a butch babydyke and, in the immediate world of J, no one seems to have a clue as to J's trans identity as a male. Along the way J flits with running away, teen shelters, homelessness, attending queer high school and a pins and needles relationship with a straight artsy girl, 'Blue,' who's a painter and is in the dark about J's trans status. At his LGBTQ high school (here fictionally named after Sylvia Rivera but patterned after New York's Harvey Milk High School) he befriends trans woman Chanelle, a sad-eyed, poetic 20-year old returnee to queer high who is miles above the other students in literary knowledge and sophistication and Zak, a buff, 20-something trans man who becomes a kind of mentor and ideal for J.
Without giving too much of the story away, J eventually gets hooked in with support groups, a therapist and into the path of medical transition. He has issues with his family and is tortured about disclosing his trans status to Blue. He cuts school a lot and wanders around New York obsessing over his homemade binder, copying the tough guys he sees, wearing too many layers of clothes to hide his body and endlessly smoking. It's fair to say I've never read a young adult novel where the main character chain smokes as much as J.
A New York Frame of Mind
While I can understand why the process of approaching transition would be compelling to someone who wasn't trans, for myself, as someone who is trans, an awful lot of the narration reminded me of so many hundreds of tortured YouTube videos. There is a lot of doled out "trans information" thinly disguised in a fictionalized setting—good from a standpoint of authenticity and, for the most part, accuracy but not always compelling. The first half of the book, where J is reaching a breaking point and cutting school for several weeks, is the most powerful. It accurately portrays urban (albeit middle-class) youth going through the alienation and self-doubt of exploring their gendered selves while nearly falling off the edge of mainstream society. The second half of the book seems overly plotted, rather pat and, at times, under-explored. It fell into the "and then this happened, and then this happened..." school of story blocking. 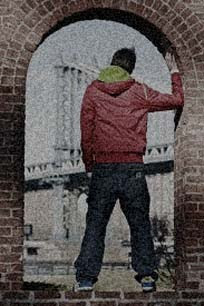 A Story about a transition or a character?
My biggest issue with the book, however, has to do with the title character. Other than the fact he's a trans boy and the figure around which the story of being a young trans person is wound around, he's really not especially compelling. While he's described as being somewhat shy and shown as not terribly articulate, he's also not a terribly interesting person. For a young guy growing up in New York with two fairly intelligent parents, he seems incredibly naive, disconnected from his environment and, yes, boring. Most of the other characters in the book felt more alive and fun than J and, as I read it, I often wondered why they were even interested in hanging with him? I did appreciate that, unlike "Parrotfish" and "Jumpstart the World," two other young adult books featuring trans masculine characters, J is in no way presented as a sensitive character (AKA, still somehow deep down innately female). He's frequently a clueless brick in the way many teenaged boys are.
First person: Where it Belongs
Where J does deserve big-time credit is in it's realness, gritty detail and use of J as the narrator. Too many trans books such as the recent "Jumpstart the World," "Almost Perfect" and "Luna" use the device of having a cis narrator interpreting a trans experience. While I can understand a non-trans writer being loathe to presume a trans voice when they haven't lived that life (and Beam obviously has none of those qualms) it creates a certain distance from the issues and feelings raised by the trans experience... as though it was being tip-toed around. I Am J is also a far superior, better written and more accurate book than the rather lightweight "Parrotfish," perhaps the other best known book about a transmasculine teen. Beam's book is a great improvement both in terms of showing more of the real struggles trans youth face but also taking it out of a sterile, idealized suburban context with which a broader range of teens (eg nonwhite) can connect. 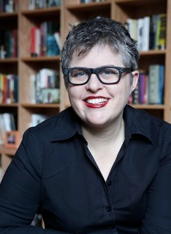 Cris Beam, author of 'I Am J' and Transparent
As to a non-trans writer embodying the trans experience, J himself has concerns about his cis friend Melissa exploiting his life as the basis for a dance/performance piece she's doing. He says he "didn't want Melissa to dance his story; he wanted to photograph it (himself)." Nonetheless, Beam, more than any other cis writer, certainly knows the world of urban trans youth having taught at a queer/trans high school in LA (which her previous non-fiction work, Transparent, is based on) and being a de facto foster parent/mentor to a trans teen herself. While I'm not going to play the game of "rate the ally" she deserves her trans cred and in the book's Author's Note, sensitively addresses some of the issues of her, a female, non-trans middle aged white woman writing this story. I Am J also includes some thoughtful resources and contacts readers who are exploring their gender issues can access.
A Good Second Wave: Waiting for the Third
While I think I Am J will deservedly be viewed as a groundbreaking book by many, I can't help feeling that, in a few years, as much more literature and art is being creating by actual trans men and boys and not just their allies, far more powerful and sophisticated narratives will be created. Stories which go beyond "transition is hard" and deal indepth with compelling characters who happen to be trans instead of somewhat dull ones who are plugged into a generalized trans narrative. As readable and needed a book as I Am J is, I kept wishing J the person was as interesting as his transition.
Posted by Gina at 9:34 AM