Paul Soileau is a white, gay, self-described performance artist whose main creative outlet is drag. A native of Louisiana, after a stint in the East Village in NYC, he was based out of New Orleans until left homeless by Hurricane Katrina and eventually settled in Austin, TX. His prior best known stage persona was called Rebecca Havemeyer, a white southern woman who looked like "a lady who lunched" but with pretensions to being more hip. A southern Dame Edna. As a drag persona, it was fairly subdued and not overly trashy. But recently, Soileau has performed using a new character called "Christeene Vale" who is what appears to be a crack-whore trans hooker of some kind of non-white ethnicity. It true that some of the earlier Christine videos didn't sound as "black," but in the most recent one "Fix My Dick" he clearly attempts to "sound black."


Soileau's work as Christeene has appeared on the "Funny or Die" site including a video for a song called "tears from my pussy." While Soileau doesn't wear blackface, Christeene sing/speaks in a patois clearly suggesting she's supposed to some variety of a person of color (Soileau himself says says, " Janet Jackson and Mike Tyson inspired the vocal creation of Christeene's childlike nasal whine.") He wears a ratty black wig, smeared makeup and, most often, a cheap secondhand store dress which looks as if it's been slept in for a month. He also uses a crappy, ill-fitting gold-capped tooth to make his teeth rotten. The entire effect is of a trans hooker on the bottom of the sexworker totem pole who's been tweeking for the last year. Think of it as skanky drag with a certain amount of Marilyn Manson mixed in. 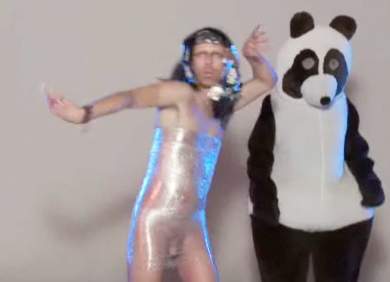 More "Die" than "Funny"
As Soileau says of his character in the Austin Chronicle:

"Christeene is a very strange vagrant creepy woman/man/woman who somehow has a platform to express her-/himself only with the knowledge she/he has obtained from the grocery store magazine racks or word of mouth. Most everyone you talk to is the same way. Nobody knows what the hell they're talking about. And Christeene is calling you on it.

"All my characters are ignorant. Rebecca, she has 'winning ignorance,' as I like to say," says Soileau. "I think Christeene has 'winning ignorance,' because I myself am quite ignorant. I mean, come on, girl, I'm Louisiana-educated. I ain't gonna brag like I know my stuff. I'm not gonna say stuff I don't know. Or try not to, unless I'm in character. Then I can get away with it." (note: Soileau graduated from Loyola University in New Orleans... which costs about 40K a year)

Christeene is social commentary. That's why I'm doing this. You [Paul] do have a message... Christeene comments on gender, sexuality, media, pop stars, and then flips it all on its head... she's likable, sweet, and sincere.

Although as Soileau himself admits:

There’s a group of people who just don’t like Christeene. It’s usually women, a certain kind of woman, and somehow this Christeene character just strikes them in that feminist way—-that I’m being derogatory or something. But they can’t put their finger on it. Because Christeene’s a man, but Christeene’s a woman, and Christeen’s singing about her pussy and her butthole and getting fucked in both, and enjoying the dick of a man and the pussy of a woman, and enjoying having a baby… she’s a creature. She’s everything.

Interesting how Soileau puts it... Christeene's a man, but Christineene's a woman... in other words, Christeene is supposed to be some flavor of trans. And even though Soileau is of cajun background, the way Chrsteene speaks/sings is clearly supposed to sound non-white. Therefore... the act is really him portraying a trans hooker of color who is massively fucked up and screwing to survive. You may now laugh.

The question is, what is the real point of Soileau's act? One might say it's about the lowest member of societies raw sense of survival. One might say it's about dignity in the most screwed up of persons. But the reality is, looking at any aspects of Soileau's act, it's really hard to actually find those statements in the performance (nor Raval's claim of her sweetness or sincerity). What much of the act (which often includes Soileau as Christeene revealing his dick) is... fucked up people are good for a laugh. Trans hookers of color are hilarious, especially if they're strung out and living on the street.

Weekend Warriors
Yes, there are many highly homogenized (by appearance anyway) gay men who project desperate fantasies of their wished-for glorious sleaziness onto trans women, drag and persons of color. They love to drone on about their lack of "political correctness" and how they're thumbing the finger at self-loathing gay men and the LGBT establishment who are embarrassed by drag. What's notable however, is how these men don't live "the life", they just use it as performance fodder for a few hours of outrageousness (and making trans people look trashy) only to retreat back to their IZOD shirts and designer eyewear when it's over.

Does Soileau's act (AKA performance art) ever ponder WHY someone like Christeene got so messed up... was she able to find work, or remain with her family or go to an expensive Catholic University? Not really, it's supposed to be outrageously funny and, as with fellow white, gay, southern performer, Chuck Knipp and his character Shirley Q. Liquor, if you can't laugh at it, then STFU. Interesting how southern gay culture seems to be producing a stream of "art" using racism and exploiting trans identities and issues (or at least, done through drag or female impersonation) and using a shield of "humor and entertainment" to deflect criticism. Maybe this is what old racist rebels (and countless cracker country singers) meant when they would endlessly proclaim, "the south's gonna rise again!"