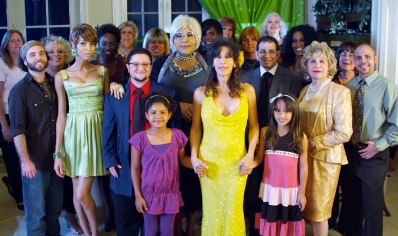 Janice Danielle (in the yellow dress)
with the Bella Maddo cast
Bella Maddo is a new short film being shown three times at LA's upcoming Outfest Film Festival. Okay, okay, you say, another day, another short, another LGBT festival, and so it goes. Aha, but this film is directed by a trans woman. Okay, okay, you say, well, Andrea James has directed some films, Kim Reed directed that 'Orson Welles is my grandfather thingie.' Aha, you say again, but this film has young trans children in it. Real trans children, not make believe 'I've had an agent since I was three' years old' cis-playing-trans-children. Okay, you think, that's pretty unique. And, in fact, this film ONLY has trans people in it. No cis peeps. Zero, nada, zip. Hmmm, you have to admit, that is unique. And moreover, these performers don't even play trans people in this film.
The Bella Maddo trailer featuring Isis King
as a faabulous party guest
(if the video looks cropped on your browser you can also view it on the Bella Maddo website.)
It's not a film about trans people, trans issues, transitioning... it's about, you know, the other kind of people and how fucked up they can be. But they're all played by actors who are 24/7 trans peeps. And they're all different ages and ethnic backgrounds, none of them dress hoochy, none of them portray sex workers or campy trannies and there are no pregnant dudes. Yes, Bella Maddo is truly a groundbreaking film. I was fortunate to be able to speak with Janice Danielle, the film's co-writer, director, producer and castmember about how this project came together. 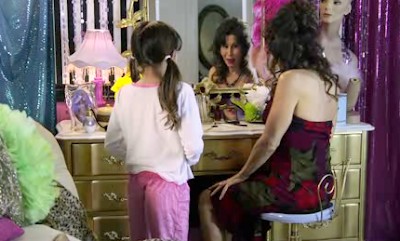 Janice Danielle as the very vain Bella and her daughter played by Jazz
Janice came from a theater background with considerable experience in doing standup. She had previously been in a number of films often playing small roles especially of the trans hooker/campy tranny variety. But it was when she was seriously up for a non-trans role which a producer wanted to hire her for but backed down because he thought her trans history would be too much of 'a distraction' that she'd come to a tipping point. While working on a project for the now defunct Q Network she met her cis co-writer Jen Roe, who had a long background in television especially doing producing on the Montel Williams show.

Janice came up for the idea about Bella Maddo (a slight reworking of "crazy beautiful" in Italian, and Bella is the name of the mother character). She and Jen worked on the script while Janice searched for financing and lining up a production facility. To further complicate matters, Janice, originally a Brooklynite who had lived for long periods of time in LA, was currently with with her husband and son living in Panama. Upon moving back to Florida, she secured financing, and connected with Canvas Films, a Fort Lauderdale production facility. The idea of using all trans actors (playing cis roles) came from her own frustrations with being cast in a narrow niche. But gathering them all together proved a challenge. 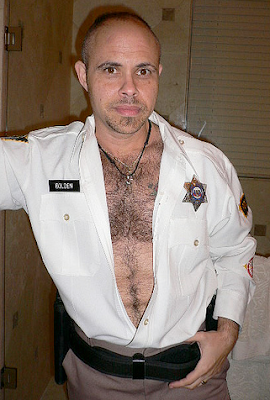 Mark Angelo Cummings as the
um, hunky cop
Casting through Skype
Her casting process started on the Internet, partly by looking at trans-related videos on YouTube. The trans man who played her husband in the film, Torrin Shea Aguilar from Arizona, had a witty Q&A series on YouTube and she liked his flair and humor even though he had no prior acting experience. Some other performers like Rajindra Narinesingh and singer/trans activist Mark Angelo Cummings were local Floridians, but most of the performers auditioned initially through Skype. Janice ultimately flew some of the final candidates to Florida for an in-person meeting. One of the most high-profile performers in the film is Isis King, well known from her participation on America's Next Top Model and her many appearances on the Tyra Show. The film has a party scene and needed a singer, so Janice contacted Joe Stevens, a trans man who forms half of the well-known duo, Coyote Grace. They communicated through Skype and she flew him to Florida for the filming. 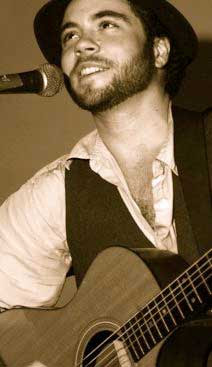 Joe Stevens, 1/2 of Coyote Grace
Transkid casting call
The most unique challenge was casting the part of her daughter for the film. Janice was adamant in wanting to also use a child who was trans for the film. She contacted Kim Pearson of Trans Youth Family Allies who, after being assured it was on the up and up, put the word out to her member families how Janice was looking for potential young performers for the film. Much to her surprise, the response was overwhelming and Janice had to sort through some parents with proto stage ambitions for their kids. The child she ultimately cast was one who was already very well known through her appearance on the 2007 Barbara Walters special on trans children, and through her several YouTube (where she's performing and dancing). Jazz, now 9, was able to be in Florida for the filming which made the logistics of her participation possible (there is another trans girl in the film, Emma, who was also invited to join the project at the 11th hour). 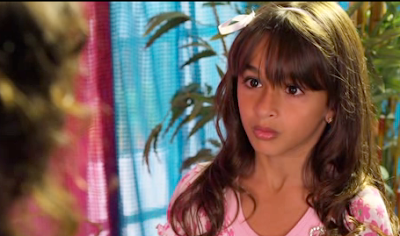 9-year old Jazz portraying a child with
a very screwy mom.
A post-trans trans film
Filming started at Canvas in February, 2010. Since Bella Maddo concerns serious issues of eating disorders and parental child abuse, Janice told to cast to play it very straight although there are some comic undertones and theatrical elements in the script. Ultimately, the film has a more New York/Jersey Shore/Long Island vibe than anything remotely having to do with trans people. Freed from a plot stuck on trans themes, Bella Maddo is truly the first "post trans" trans-involved film. Janice is ultimately hoping to expand the film into a six-part series which would appear on a broadcast channel like Logo.
It debuted at the 2010 Cannes Short Film Corner (more of a filmmaker showcase and not part of the competition) and got mostly positive response. Janice said that festivals to which she submitted the film almost seemed intimidated to ask her about the aspect of the all-trans cast. Janice had previously appeared in a number of films which played at Outfest, had contacts with their staff, and seemed like the natural venue for the film's US Premiere. Bella Maddo will appear in several collections of screened shorts (including one intended for comedies... which she feels isn't altogether appropriate given the film's subject matter) and an evening program with a trans panel discussion and pairing it with the new digitally remastered print of the 1960s pre-Stonewall documentary "Queens at Heart" (which will be discussed in a future Skip The Makeup post). Janice Danielle's future projects include a film completely cast with trans children using some of the talent she saw during auditions.
Breaking through assumptions
No matter how Bella Maddo is ultimately received , reviewed or distributed (and marketing short films is no easy task) it is already a unique and powerful achievement. It views trans people not as objects of curiosity nor with bodies and histories to exploit or dissect, but as people who can play any role given the chance and create their own art unfiltered through non-trans expectations and assumptions.
Bella Maddo's OutFest US Premiere:

Sun. July 11 at 9:45pm in the program of comedy shorts "From Uranus to Titicaca"; the Director's Guild of America Theater #1 - 7920 Sunset Boulevard, Los Angeles

Sun, Jul 11th 9:45pm at Sat, Jul 17th 5:00pm. In the program "Trans Politics Then and Now" Following the screenings, there will be a panel discussion moderated by Riku Matsuda. Director's Guild of America Theater 2 7920 Sunset Boulevard, Los Angeles