Marriage in Malawi a Gay Issue? 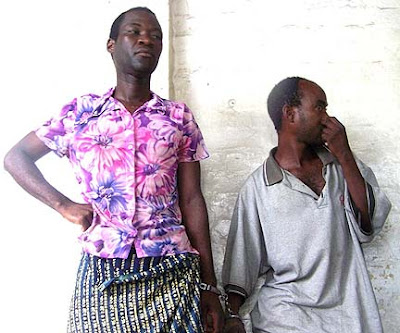 Tiwonge (l) wears a traditional female skirt and top.
Dominating much of the world's human rights blogs in the past few days is the horrific story out of Malawi involving two [men], Tiwonge Chimbalanga and Steven Monjeza, who were engaged to be married but were summarily imprisoned and sentenced to 14-years hard labor. It's been repeatedly mentioned as the newest proof of a virulent wave of homophobia which is sweeping much of sub-Saharan Africa. Celebrities such as Madonna (who, in a much publicized story, adopted a child from that country) have weighed in on the case. She stated on her web site, "I am shocked and saddened by the decision made by the Malawian court, which sent two innocent men to prison." In sources from the New York Times to Ms. Magazine, this case has been presented as gay rights issue and how the rights of same-sex couples have been attacked. 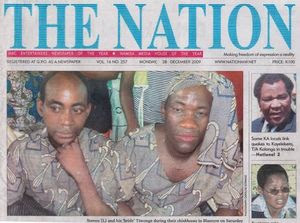 The story which initially appeared in the
Blantyre newspaper, The Nation
What few of the articles have brought up (at least seriously) is that Tiwonge Chimbalanga (which is a female name) identifies and worked as a domestic, as a woman in the capital city of Blantyre. In the Times of London Ms. Chimbalanga is described as, "defiant, dressed in a blouse and describing himself as a woman." In the New York Times article, Ms. Chimbalanga's employer, Jean Kamphale, [Mr.] Chimbalanga’s boss at a Blantyre lodge, testified, "she accepted 'Auntie Tiwo' as a woman and assigned her cooking and cleaning chores. But after the article in The Nation (the top Malawian newspaper) appeared, she made her employee disrobe and refused to let him stop until he was naked from the waist down and 'that’s where the cat was let out of the bag.' " No mention is made in any of the news sources quoting Ms. Kamphale how demeaning such an examination would have been.
What's disturbing is how papers like the NY Times clearly identify Chimbalanga as female-identifying, as in, "Tiwonge Chimbalanga looked like a man but said he was a woman. [He] helped with the cooking and dressed in feminine wraparound skirts" but then continues to use male pronouns throughout the rest of the story. Not only does this degender Ms. Chimbalanga, but continues to throw a standard of degendering on all African women as looking somehow masculine.
Sickening
The Times does note how she was humiliated in court because of her gender identity. After she contracted malaria while incarcerated, she appeared in court while extremely ill:

As [Mr.] Chimbalanga fell to the floor and began to vomit, spectators mocked [him.]“Auntie Tiwo is pregnant,” some called out.[ Mr.] Chimbalanga was led away, only to return with a mop and pail to clean up the mess. 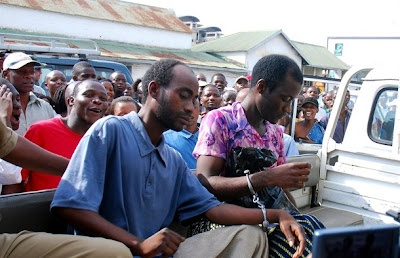 The couple being taken to court. Ms. Chimbalanga
was not permitted to wear the traditional
female head scarf.
Human Rights doesn't equal accurate gendering
After they were arrested, Human Rights Watch reports that, "[Ms.] Chimbalanga was subjected to a medical examination, without consent, at Queen Elizabeth hospital on January 6, 2010, with the aim of establishing whether Chimbalanga had had sexual relations with males and to establish Chimbalanga's gender." They were ultimately charged under sections 153 ("unnatural offences") and 156 ("indecent practices between males"). Often expressed are concerns about how this conviction will drive men to have same-sex partners on the "down low" thereby encouraging the spread of AIDs in sub-Saharan Africa. Prof. Michel Kazatchkine, Executive Director of the Global Fund states, “The criminalization of individuals based on their sexual orientation is not just a human rights issue - it also undermines investment in HIV and AIDS as it drives sexual behavior underground and creates an environment where HIV can more easily spread.”
The H word not the T word
It is true a conviction like this will only oppress gay men even more to have sexual relations "on the down low" and that Malawi has one of the highest rates of seropositivity in Southern Africa (and therefore, the world). Yes, they were convicted under statutes which were meant to punish same-sex couples. But for mainstream publications (and many gay blogs) to ignore the gender identity of Ms. Chimbalanga is, in its own way, equally horrific. Nowhere is the term "transphobia" even mentioned. In this misgendering, it greatly resembles the story in the New York Times about the 1999 murder of soldier Barry Winchell, which completely ignored his girlfriend Calpernia Addams' gender identity and presentation as a woman, and characterized it as a case of homophobia because Winchell was in a "same sex relationship." Many high profile gay organization were only too happy to follow suit and identify Winchell and Addams as a gay couple to suit their organizing and fund-raising needs. 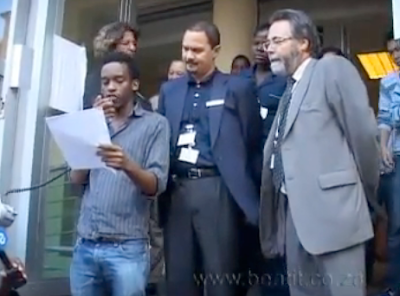 At a demonstration against the conviction in
Capetown, gay activists continued to refer
to the couple as 'two men' despite trans
groups' participation in the event.
Um... two 'individuals'
Some sources, like Amnesty International, have 'skirted' around the issue of Ms. Chimbalanga's gender identity by using the phrase "perceived same sex relationship," yet continue to use "men" when talking about the couple:

The couple were beaten while in police custody. Amnesty International considers both men prisoners of conscience, imprisoned solely for their perceived consensual same sex relationship, and has urged the Malawian authorities to immediately and unconditionally release the couple.

This case deals with human rights issues, attacks on people who are perceived as men who have sex with other men and, especially, recognition of gender identity and expression. It's important to note how Ms. Chimbalanga is regularly taunted in the press and on the street in Malawi as "Auntie Tiwo," as though her identity is a joke.
That Ms. Chimbalanga doesn't look female enough for the NY Times' standard is irrelevant. Last time I looked Malawi, one of the poorest countries in the world, doesn't have health or transition services for trans people. What's happening to this couple is horrific enough without the repeated misgendering and mischaracterization of this case going on in the western media. If we're going to be rightly concerned about homophobia and attacks against same-sex couples in countries like Malawi and Uganda, then why isn't the media bothering to examine the lives of trans people in Africa which the sad story of the injustice against Ms. Chimbalanga and Mr. Monjeza actually concerns.
* This is a link to a video which shows some of the atmosphere around the courthouse and some interviews with Malawi and Brit human rights activists.
Posted by Gina at 9:26 AM