The Journalistic Art of Total Obfuscation 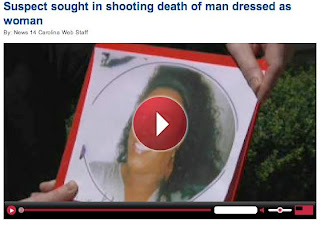 On April 3, a person who was born with the name Tony Alston 44 years ago was shot in front of their house in Charlotte, NC sometime after 10pm. After the victim was shot, they managed to get to their neighbor's house and ask for help. The victim, barely conscious, managed to give police some basic information about the shooter before dying at the Carolinas Medical Center. The inside of the home appears to have not been touched or ransacked. The victim was described as working long hours at as a manager at several Family Dollar stores in Charlotte.
And this is where the story gets confusing... really confusing. 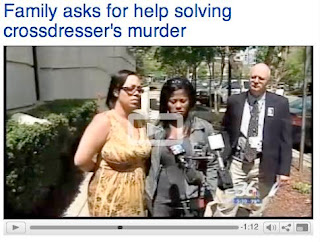 Earlier this week, the victim's two sisters came down from New York to ask for help from the police and media in finding out who would murder their sibling. As they said, "Tony was a man who for years dressed like a woman." But different news sources give widely varying suggestions of what exactly that statement means. The Charlotte Observer wrote: "Alston had dressed as a woman since high school." In their interview with homicide detective Bill Ward, he stated, "(People) knew he was a man, called him 'she' and respected his lifestyle." . Okay, got that, but what "lifestyle" was he referring to. WCNC-TV News reported, "Alston was a crossdresser and spent most of his time dressed as a woman." WBTV-Channel 3 writes it this way, "Tony was a man who for years dressed like a woman."
Say it again... slooowly
So, let's add up what we know so far. The victim has been dressed as a woman at least most of the time since high school. Or, alternately, since after finishing high school, the victim spent some portion of time dressed as a woman. What "most of 'his' time" means is confusing to the hilt. To try and get some picture of the victim's identity becomes almost impossible from these reports.
Enquiring Minds want to know
Was the victim (and I'm only using this term because it's very unclear whether they had a female/male or other gender identity from these accounts) presenting as female when shot and killed? No mention of this is made. Did the victim use "Tony Alston" as their day-to-day name or did they use a different name? No mention. Did the victim live 24/7 as a woman? Was the victim a gay man who occasionally did drag?
Did the victim primarily dress as a woman when at home or at private functions or did they present as female within society? The detective's statement about "people respecting his 'lifestyle' and "calling him she" sounds as if the victim was out in the world as a woman. So, what's the problem, why does this have to be so difficult? Was she called she all the time or was he called she while he was presenting as she? It's not rocket science folks, it's journalism 101. Ask a question, get an answer, evaluate the facts surrounding the answer, write your copy.
Instead of actually explaining (just for now, let's call her Ms. Alston's) life, all the articles quote the sisters thusly:

Prophete (one of his younger sisters) said Alston's dressing hadn't been an issue with his family and they didn't know of anyone would harm him because of that.
"It didn't matter; we didn't judge him," she said. "Anybody, please, give us something. That was my oldest brother." -- Charlotte Observer
---
Ms. Prophete said, "Maybe we should have been more concerned (about 'his' lifestyle). Yeah should have been now. So the homosexual community, anybody please. Please give us some kind of information. -- WBTV

One of the victim's sisters went on to say, "(Alston's dressing) hadn't been an issue with his family and they didn't know of anyone would harm him because of that." "investigators don't have any evidence (crossdressing) played a role in his killing."-- Charlotte Observer

It had nothing to do with something
Since it's hard to figure out what "crossdressing" even means in this context it's even harder to imagine how much part it might have played in Ms. Alston's death. If she cross-dressed once in a while at home or at private functions... then perhaps it had no connection to her death. If she lived as a woman (which is entirely possible) then it might have everything to do with her death.
While not wanting to minimize the heartbreak the two sisters have for losing their kin, wouldn't it help to begin understanding what actually happened in this crime if we knew how cross-gender presentation actually fit into Ms. Alston's life? Rather than just saying, we don't have any evidence or don't think it had anything to do with the crime, wouldn't it be more productive to state how cross-gender presentation and transphobic reactions to it have frequently been a motive for fatal attacks in the past and might provide an explanation for what appears to be a murder? Maybe we should start from there and work backwards rather than just pretend we're eliminating the obvious? 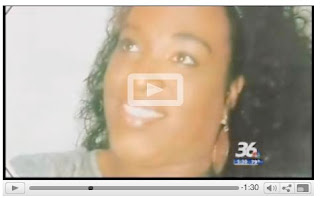 Police say *wink-wink* they have no idea
why this man *wink-wink* was attacked
Just in case you didn't know why
they were (or should have been?) attacked
Furthermore, as has happened in so many other cases, the journalist completely throws the facts of the story up in the air when they use male pronouns, and male name, yet show pictures of the victim presenting as a female. Did they not have pictures of the victim presenting as a male? If not, then perhaps you better take an extra step and find out what name she really used in life (hint: ask her fellow employees at the store she managed). If she mainly presented as a male and only situationally presented as female, then what's the point of the female-presenting photo—to remind the reader/viewer that she was kind of freak and eminently liable to be murdered?
Signs of a "getting murdered" lifestyle
This would seem to be what the tv news segments are suggesting when they use the male name and say "he lived an alternative lifestyle—dressing as a woman". There are repeated references to "his lifestyle" without actually clarifying what that "lifestyle" consists of. The detective says (cryptically) "of course, in this lifestyle, you have cell phones, you have the Internet...". (??) Yes, there are a number of lifestyles in this world which involve cell phones and the Internet. Why, what point are you trying to make by saying this? Yes, try checking the victim's calls and browser history and bookmarks. Brilliant. Needless to say, this ain't exactly CSI-Charlotte with artsy closeups, punked-out scientists, witty terse comebacks and hawt detectives.
Okay, to give Charlotte media a small boost, at least they didn't say she was a "male transsexual." (see my post about the often misread descriptor of "male transsexual")
The purpose of journalism is to begin the process of understanding and clarity, not to create total confusion about the victim and a fog surrounding issues which might have had a profound influence on why this horrific crime was committed. It shows how totally lost much of the press is when discussing a person who has any degree of gender complexity in their lives. Stuck between being totally helpless to comprehend someone whose life differs in some small ways from their own to being completely tongue-tied about not sounding ignorant to the point where they communicate, well, nothing but their own ignorance. Moreover, for all the talk of respect and acceptance, it's clear the media in Charlotte has no idea how to respect the victim's life nor how to frame this within the often-repeated frameworks in which anti-trans crimes often occur.
4/21/10 Postscript: Charlotte media has confirmed that Toni Alston (note the spelling) lived 24/7 as a woman for nearly 20 years.
Posted by Gina at 1:29 PM