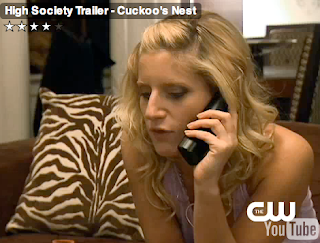 You know this one... the ultimate insult you can say to a cisgender woman: "You look like a tranny." In other words, fake because trans women are fake, ugly because trans women are ugly and cheap because transwomen who actually try and pass are hookers. And who cares what transwomen think, anyway. Besides, lots of transmasculine and queer people use "tranny" and are convinced they're reclaiming it. Well, those people have their wish, tranny is about to get a LOT more popular.

The CW tv network has used it as the tag line of the promo of their new reality show "High Society" (basically, think of 'Gossip Girl' with nastier characters). Yes, it is the 'bad girl' Dabney who makes this snide remark but, considering how much kids and teens love Gossip Girl, expect "You Look Like a Tranny" to become a new catchphrase in schools and playgrounds around the country... very likely the new "that's so GAY" or as kids love to say (whenever they show any same sex affection or compliment) 'No Homo'. Yup, networks are always looking for the new catchphrase and there's nothing like a rich bad girl to start a new trend. I'm sure all the marginalized/suicidal trans teens will love to be treated to their new mainstream insult.
Unfortunately, a lot of younger women, perhaps emboldened by their gay friends (and Internet snarkers) who liberally use tranny, are starting to make it a synonym for "ugly/gauche" with no thought about what it might actually mean to those who are called that term as hate speech or as a form of ridicule. Christian Siriano, this country's most famous "tranny slinger" had a temporary moratorium on using the term when he was called out on it by trans activists and GLAAD. It's since crept back into his vocabulary with regularity. Another major offender is RuPaul, a gay man who has stated he is NOT transgender. Ru loves tossing "tranny" around and even defended a gay Dallas newspaper's use of the term when it was called to the carpet for being offensive. Yes, RuPaul knows what trans women need.
With media figures like that tossing tranny around (along with many transmasculine people who seem to enjoy saying "tranny, trannyfag, trannyboi" at the drop of their tractor caps), it's no surprise cisgender women think they have carte blanche to use the term however they see fit. So now, the word gets "reclaimed" for use by 11 and 12 year olds to punish anyone too ugly, femme or unpopular to fit their requirements. Good work all. 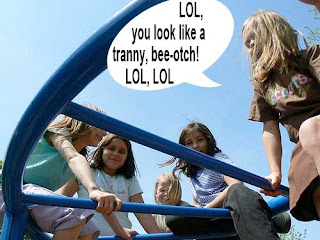 Btw, the CW's majority owner is CBS, the other network which loves to throw "tranny" in its comedy programs whenever it can.

I encourage all readers to contact the CW and let them know how you feel about this. You may wish to call this to the attention of CW Entertainment President Dawn Tarnofsky-Ostroff.
You may call the CW at: 818.977.2500 (but please be professional and polite). Explain you find using the word "tranny" in their preview of "High Society" unacceptable.
Posted by Gina at 1:00 PM