Queens at Heart: a pre-Stonewall treasure 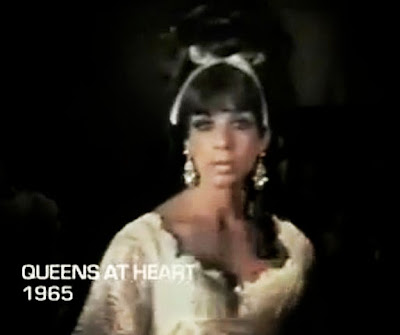 Back in the mid-90's, San Francisco film historian Jenni Olson would peruse collectors magazines like the now-defunct "The Big Reel" looking for hidden cinematic treasure. She came across a 35mm print being sold by an old projectionist in Kansas City for $75. Olson was always on the lookout for queer/trans-related titles and her radar instantly went up when she saw the title "Queens at Heart" and thought it might be related to the subject of drag. She took a chance and when the single reel arrived, a label covering it stated it should be played in front of the feature length film "She-Man."She-Man was a sordid 1967 florida-made exploitation film by Bob Clark (who would later go on to create the "Porkys" series) and starred famed female impersonator Dorian Wayne as a crossdressing dominatrix who would would force men into being feminized or feel the slash of her whip!

SHE-MAN: Dorian Wayne (in the white dress and whip)
and one of her not-so-voluntary she-men
All in the name of...um, scientific exploration
Olson, who was able to find no information about Queens at Heart prior to purchasing it, nor was it mentioned in any books relating to LGBT film, knew it must have some link to drag or crossdressing because of the She-Man connection. Such films usually played in scummy urban movie theaters (usually called art houses) which specialized in exploitation films. (a prime example of such a film which 'broke out' to be highly successful was 1962's Mondo Cane, which was an Italian 'documentary' best known for its theme song "More" which displayed many titillating and voyeuristic subjects in a similarly serious "scientific" documentary format). Queens at Heart is clearly cut from a similar cloth for the same audience. 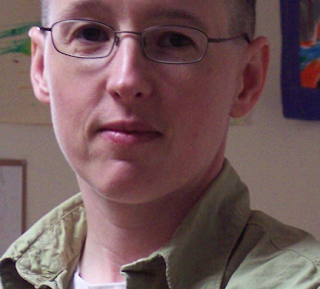 Cinematic prospector Jenni Olson
Since there was no date on Queens at Heart and Olson was unable to find other historical information about it, she determined the release date based on the release date of She-Man. It has since been been confirmed it was actually produced around 1965. Olson finally convinced a projectionist friend at the nearby independent Roxie Cinema to show the film after hours so she could finally view it. And what she saw blew her away. She remembers, "I pretty much jumped up and down in joyful amazement at this amazing discovery the whole time we were watching it."
Olson explains what she saw:

A very serious newscaster-type named Jay Martin tells the audience we're about to see the results of a six-month psychological project and introduces us to Misty, Vicky, Sonja and Simone who are seated nervously on a small couch in this guy's wood-paneled office. They go by their first names only, he explains because they are breaking the law. He speaks directly to camera through this whole first section and explains that they are all trannsexuals. 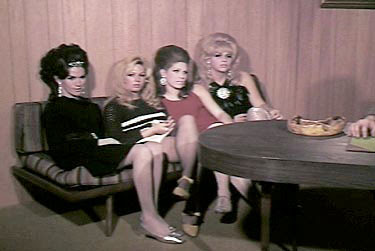 The Queens-at-Heart ladies waiting
for their creepy questioner
Kids... don't turn out like this.
The film has the same ominous tone as many sex ed or 'drug education' films from the 60s and 70s... a mixture of imparting information, exploitation and outright prurient fascination.

Then the film takes us to a drag ball where we see the four girls interacting with tons of other drag queens and regular gay guys dancing and partying at a drag ball. Really amazing verite footage, very multi-racial with black, Latino and white guys and drag queens carrying numbered contestant cards. Great music, amazing hair -- bouffant mania! ...Next Jay Martin interviews three of the four girls and asks them a lot of extremely personal and even sexually explicit questions which play half like concerned therapist and half verging on pornographic. 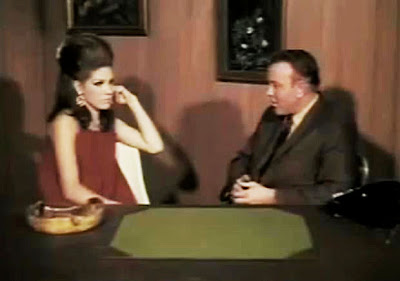 Jay Martin informs one of the women:
"You don't live a normal life, do you."
It eventually follows one of the girls to her hairdressing job (and we're informed she's breaking the law by being cross-dressed in public) ending with a deadly serious Jay Martin facing the camera and admonishing the viewers, "We know that homosexuality is a psychological aberration that should be treated, but what about those who don't want to change? Who are we to judge?" Who indeed, Jay?
Film restoration challenge
The next stop for the film was the Outfest Film Festival in LA, of which Andrea James is board member. She explains The Outfest Legacy Project for LGBT Film Preservation works with the UCLA Film & Television Archive to restore films, particularly films which portray the LGBT community and are out of general circulation or in danger of being lost. Jenni Olson joined the board of the Legacy Project and the first film from her large collection which she donated was "Queens at Heart" (she also subsequently located a second print of the film). From these two very old and deteriorated prints (since there was no existing master for the film) a new digital print would be processed and generated. Seed money for the project came from activist and writer Joanne Herman (who also paid a matching grant to pay for the remaining restoration which was largely funded with donations from the trans community). A showing of the new print was arranged by Andrea James in LA last year. She notes:

I have viewed a lot of film restorations, but this was one of the more remarkable jobs I have seen. They showed about a minute of the old print before they screened the restoration, and the entire audience gasped and applauded. It looked as if it had been shot yesterday.

Jay Martin: "You're a very tall girl aren't you...
...you're one of the taller drag queens around."
Blonde: "Yes but I'm also one of the most
beautiful ones too, darling."
Cheese, sleaze, but also gold.
Yes, Queens at Heart is exploitation. As Andrea James remarks, "The film to me feels like it was put together by someone with an attraction to trans women. It's generally respectful but has a somewhat lurid feel. The women are very ill at ease when being interviewed, but they are very self-possessed and quite thoughtful in their answers." In other words, despite the framework of "freakshow" or "sexual objectification" one still gets a glimpse of the real women behind the show and a bit of their lives from 45 years ago.
Olson explains the film's impact:

Of course it is extremely significant for us to be able to look back and see this rare portrait of 4 pre-op transsexuals being so candid and courageous in the years before Stonewall. The power of film for bringing us face to face with our forebears is absolutely incredible. I think the film is especially remarkable for how candid and brave the women are in expressing themselves so vulnerably when we can tell that the film was produced more as an exploitation film than as a serious documentary. 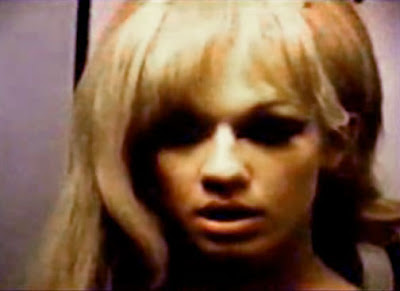 Rachel Harlow from 1968's The Queen.
No, this is NOT Helen Mirren.
Andrea James observes, "It's notable for being one of the few pieces of pre-Stonewall color
footage of trans life in Manhattan (or anywhere for that matter)." And this does make it truly a re-found lost treasure. There are films of pre-Stonewall New York like "The Queen" from 1968, about a drag beauty pageant staged at town hall. While most of the participants in that film were gay men, several of the contestants, such as the winner and runner up, eventually transitioned (Rachel Harlow, the winner, had SRS several years later and was involved in a relationship with Grace Kelley's older brother, Kell). Yet as fascinating as The Queen is, it doesn't really portray trans women living in the world as such and is more about drag culture.
A window into another era
remarkably like our own
Queens at Heart demonstrably shows trans women as part of the larger 'gay' community, a community which erupted into anger and activism only a few years later (and a trans community which was already making waves in Los Angeles at Cooper's Donuts, in Philly at Dewey's Lunch Counter and in San Francisco at Compton's Cafeteria). It's also interesting to note that, 45 years after Queens at Heart was filmed, the New York State Senate once again rejected adding gender identity and expression to anti-discrimination protections which already apply to GLB citizens. Queens at Heart is both a poignant reminder of how much society has changed yet, sadly how much remains the same.
Queens at Heart will be shown on Sun, Jul 11th 9:45pm at Sat, Jul 17th 5:00pm. In the program "Trans Politics Then and Now" Following the screenings, there will be a panel discussion moderated by Riku Matsuda. Director's Guild of America Theater 2 7920 Sunset Boulevard, Los Angeles
**For those interested in finding out more about the Outfest Legacy Project's work and some of their future restorations and possibly making a donation (preserving and archiving film doesn't come cheap), please visit their website. This is an incredible way of keeping our history alive.
Note: Queens at Heart should not be confused with a 2006 documentary (also about drag) of the same name.
Posted by Gina at 2:43 PM